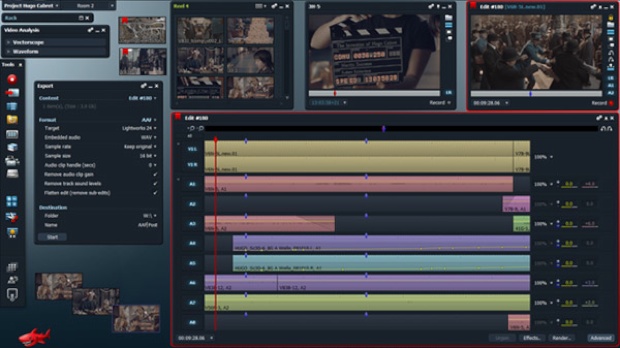 by Craig Bergonzoni
in Filmmaking, Post-Production
on Jan 17, 2013

Being an independent filmmaker means we are often times working with very little money but still making our projects happen. We use any tools and tricks we can get our hands on to help us finish or enhance our films. Of course these have to fit within our budgetary constraints. Here is a list of post production tools that are affordable for the no budget filmmaker.

1. Blender – 3D Modeling & Animation (Win, Linux & Mac)
I’m constantly amazed at what this FREE program can do. It includes many features found in competing 3D apps that cost hundreds and many times thousands of dollars. Even if all you use it for is to create cool looking 3D text for intro credits it is worth downloading and learning. Best of all, the online Blender community is awesome. With some simple online searches you can find Blender tutorials, sample projects, sample models, plug-ins and Blender experts willing to help.

2. Lightworks – Non-Linear Editor (Win) (Linux & Mac support planned)
Until recently, a low cost yet professional NLE has been pretty difficult to come by. Editshare’s Lighworks now fills that void. Lightworks comes in 2 versions. The standard version which is Free and a Pro version which costs $60 a year. A handful of features make the Pro version worth the $60, but some of the top features are wider codec support & more access to the Lightworks community through their site. In order to use Lightworks you must have a PC running Windows, but Linux support is right around the corner, and Mac support is in the pipeline as well. Make no mistake about it, this is a work hourse of a NLE. Many Hollywood films have been cut on it. Check out the Free version and upgrade to Pro if you dig it.

3. Gimp – Image Editor (Win, Linux & Mac)
Every post-production suite needs access to an image editor. Photoshop is the standard, but there are other options. If Photoshop is out of your price range or if you are just a rebel then you should give Gimp a chance. Like Blender, Gimp has been around for years and has built a great community of users. Gimp now runs on all three major platforms, Windows, Linux & Mac. It is not Photoshop but it does a lot of what film and video editors need in an image editor.

4. Pixelmator – Image Editor (Mac OS X Only)
Gimp is a great image editing option no matter what. However, if you are a Mac user, Pixelmator may be the app for you. Pixelmator is not free like Gimp but at $59.99 it is a great buy. At the time of me writing this the price is $14.99 on the Mac App Store, for a limited time. So, hurry! Go get it now! I’ll wait… Got it? Ok, good. I love the minimal, extremely Mac-like interface of Pixelmator. I also love the speed of the app. It is very responsive. Add Pixelmator to your bags of tricks, Mac users.

5. Audacity – Audio Recorder & Editor (Win, Linux & Mac)
Whether you are sweetening a piece of dialogue or just converting an audio file you should have an audio editor in your toolbox. Audacity gets the basic jobs done well. Like a few of the other tools on this list it is free and cross platform.

6. DaVinci Resolve Lite – Color Correction (Windows & Mac)
Access to advanced color correction tools like Resolve costs thousands of dollars just a few years ago. Now you can buy the full version of Resolve for $999 or download the lite version for Free, assuming your computer meets the system requirements. If your project is of 1080p resolution or lower you probably won’t notice the difference between the full version and lite versions of Resolve. The full version gives you the ability to output projects higher than 1080p and supports multiple GPUs. If your computer can handle it, download Resolve Lite, watch some tutorials and learn how to make the most of it.

7. MPEG Streamclip – Video Convertor (Windows & Mac)
It may not be quite as sexy as DaVinci Resolve or Blender but having a video converter on your system is essential. Even on systems where I have access to Compressor or Media Encoder I still make sure I have a copy of MPEG Streamclip installed. Use to convert DSLR dailes from their native H.264s or to convert your project to a web friendly format.

I tried to keep this list restricted to post-production tools that cost under $100. If I was to expand it to include tools that cost $300 or less the list would double if not triple. In that case Final Cut Pro X (yes, FCPX!), Motion, Logic Pro & Pro Tools Express (formerly LE) would have all been included. Maybe that will be a list for another day. In the meantime, check out some of the tools on this list, and post below anything you think I’ve missed.