“My Process was Much Like Design Brainstorming”: Editor Anisha Acharya on Neptune Frost 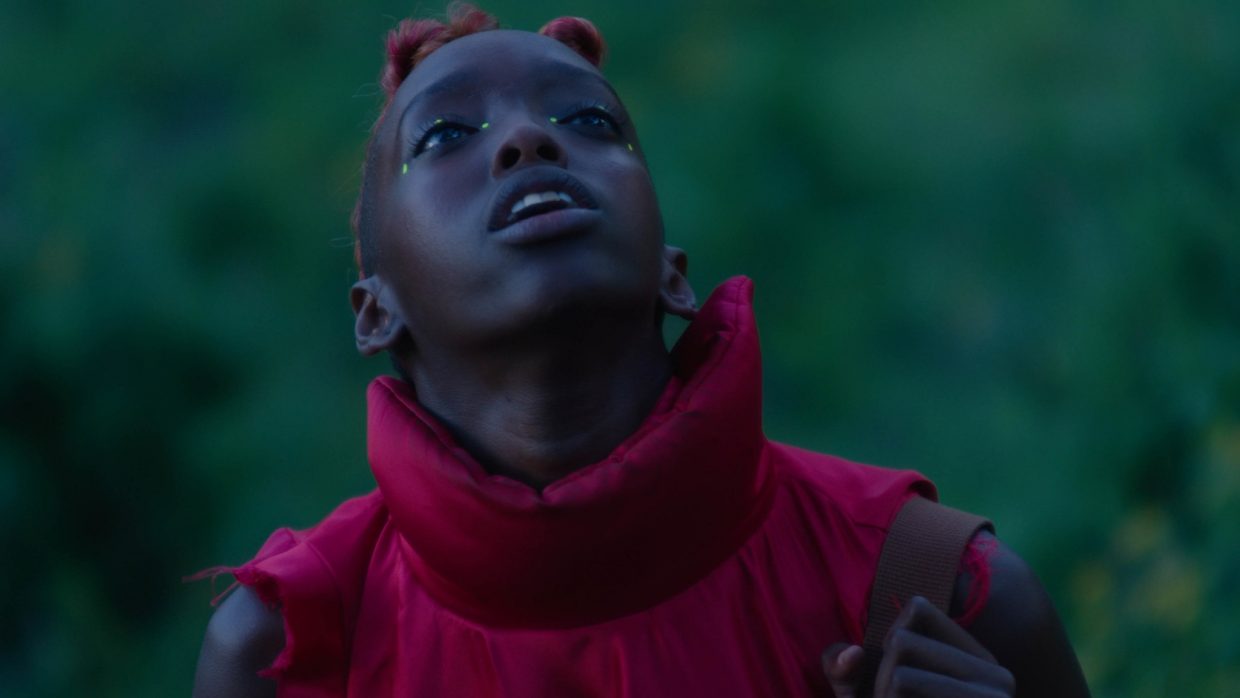 A still from Neptune Frost by Anisia Uzeyman and Saul Williams

Although its distinct color palette is more immediately noticeable, Neptune Frost, a directorial collaboration by slam poet Saul Williams and actress-cinematographer Anisia Uzeyman, also weaves a complex Afrofuturist narrative into a musical that brings pressing political questions about colonialism, environmentalism, and more to the forefront. Editor Anisha Acharya explains how a plethora of narrative interpretations informed the final product, and how the filmmakers struck a balance between complexity and accessibility.

Acharya: I was recommended to the project by Dody Dorn, ACE, whom I had assisted previously. When I learned that the film was a sci-fi musical shot in Rwanda largely in the Kinyarwanda language, I was intrigued. The script, written by Saul Williams, was complex, brimming with ideas, wonder and curiosity. I deeply appreciated its spirit of revolution. I also loved the music Saul wrote for MartyrLoserKing. I read the script multiple times and had a lot of questions and interpretations which I shared with the directors, Saul Williams and Anisia Uzeyman, in my first meeting. I hoped that I had expressed my curiosity, eagerness and enthusiasm to be part of the film. I suppose I did, because I was hired.

Acharya: Neptune Frost was unlike anything I’d ever edited. The script was unconventional and uninhibited. No two people could fully interpret it the same way, and yet it managed to be cohesive in a way that was inspiring. For my first cut, I responded to the nature of the footage and assembled it based on my interpretation of the script. Once I began working with the directors, I learned subtextual and contextual nuances that they wished to express. Some scenes took on new meanings and we reshaped the narrative as we went along. The process was ever evolving and full of improvisation. It was like painting a moving canvas, which kept me on my toes.

Filmmaker: How did you achieve your goals? What types of editing techniques, or processes, or feedback screenings allowed this work to occur?

Acharya: A large part of the editing process involved reinterpreting the material to focus the emotional journey and narrative. My process was much like design brainstorming—you receive a brief or prompt and you ideate multiple approaches toward that brief or prompt. We often tried things that were overly complex or layered to reach an understanding of what was at the heart of the idea. As we shared the film with people, we simplified our approach to focus the audience’s attention in a meaningful way. We knew that there would always be some things left to interpretation. We were lucky to have Dody as an editorial consultant on the team. We liked sharing ideas with her, and her experience was invaluable as we refined the film.

Acharya: I studied editing at the American Film Institute. After graduating, I edited narrative and documentary features and short films, and used those days to become union-eligible. I got my first union job through one of my teachers at AFI, Farrel Jane Levy, ACE. She trusted me to assist her on a television show, and I was able to learn from the best. I continued assisting in television and film and editing as much as I could. Through assisting, I learned how a real editing room functions—the creative, technical, managerial and socio-political aspects. I learned a tremendous amount from the editors I assisted, including what kind of editor I wanted to be as a storyteller and what I wanted my lifestyle and work environment to look like. Through my independent editing projects, I discovered that working with people you like supersedes a project you may be drawn to. And if you’re lucky, you have both.

Acharya: I edited with Avid Media Composer because I’m most comfortable with it. I think it’s sturdy and intuitive. I worked remotely with my lovely assistant editor Skylar Zhang, and Avid made our process for exchanging dailies very streamlined. On this project we had different looking subtitles for dialogue, voiceover and lyrics, so the Subcap tool was a boon.

Acharya: All the music scenes in the film had a layered narrative. One of the more technically difficult scenes to cut was the miners’ drumming sequence early in the film. Between takes, the miners drummed at different tempos so it was challenging to be where we wanted to be and also have the drumming be in sync. In the These MotherFuckers musical sequence, the voices that come together had varying tempos and keys. For both sequences, I employed sound and picture speed changes as well as pitching of the audio to create a seamless cut.

Narratively, balancing the story within the song while honoring the rhythm and music was often challenging. A lot of the songs had multiple dimensions—what was happening then and there but also what was happening elsewhere at another time, or a coming together of characters, and sometimes dimensions. Keeping the characters and ideas alive was a juggle.

Acharya: The hacking sequences in the film were crucial storytelling segments right from the script stage. I visualized different versions of temp VFX animations for them so we could envision how they worked in the narrative. Those involved compositing animated text over layers of graphic elements and stock footage in Adobe After Effects. Narratively, they portrayed the hacks as well as the magnified political effects of the hacks based on what was scripted. Over time, they evolved and took on a language of their own as we worked with our VFX producer Andres Landau and his team.

Acharya: At every stage of the process, even now that the film is made, I’ve discovered new interpretations. Sound played a huge role in reimagining the film. While we edited the film, our focus was on the music and naturalistic portrayal of the world. Our temp sound design was often subtle. We knew the soundscape of Digitaria would be a character in itself. Our sound designer and re-recording mixer, Blake Leyh, worked wonders in imagining the soundscapes. His work created the heightened separation of the worlds that transformed the film.

From pre-production to post production, the film has had many creative voices with unique interpretations of the script. All these voices funneled through the directors’ vision have resulted in a rich narrative that I think couldn’t be recreated.