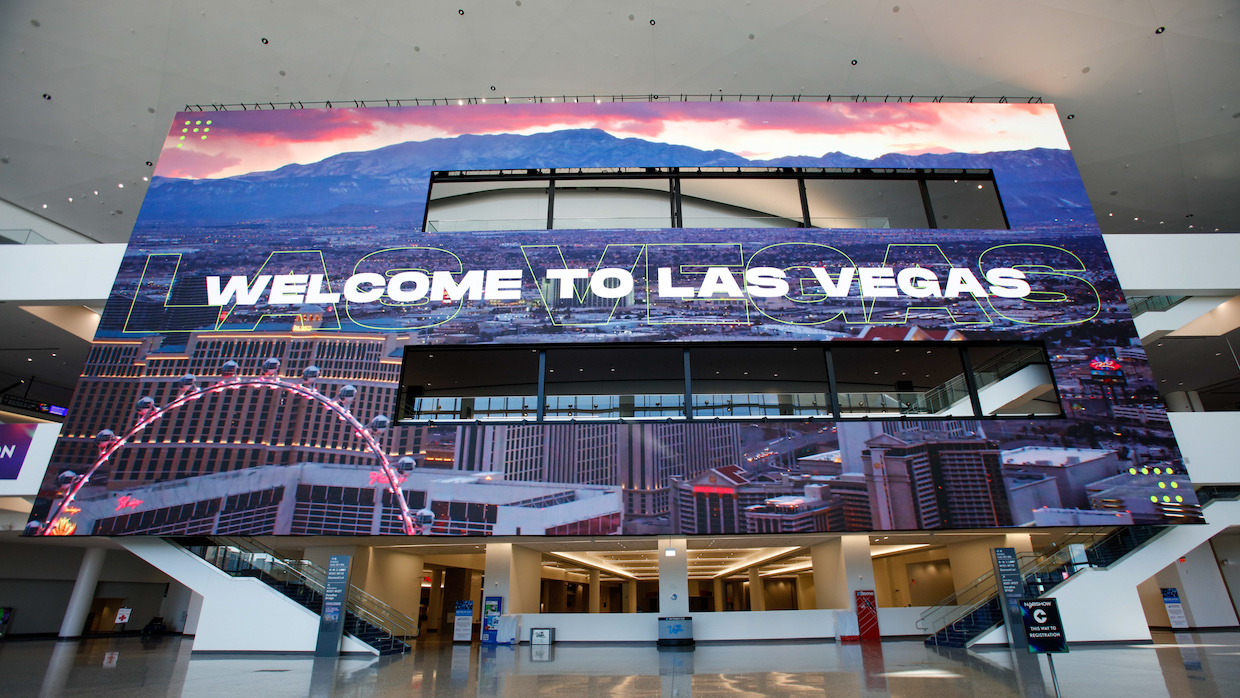 All it took was a billion dollar acquisition for the industry to take a bigger leap into the cloud. Not to say that cloud-based workflows haven’t been part of productions already, but if you wanted to stamp a singular theme on NAB Show 2022, it would be: “to the cloud we go.”

While the “natural buzz” of the show floor was tame, it allowed attendees to spend more time at booths to connect with exhibitors. Plus, it wasn’t hard to find a seat at the number of events and discussions throughout each day. For creators, there was plenty to peruse from banner companies like ARRI, Blackmagic, Canon and Sony, but there weren’t many considerable “big splashes.” ARRI did not roll out its new S35 4K camera, Canon had already announced a number of its fresh offerings prior to the show that included a new “Flex Zoom” series of cinema lenses and Sony put its prized VENICE 2, which was released last November, center stage. This might actually be a blessing in disguise, as there’s been a bit of camera release fatigue, especially in the mirrorless market.

When integrating Shogun Connect or Atomos Connect with Capture to Cloud, Atomos conveniently attaches to both the Ninja V and Ninja V+ recording monitors. You can upload directly to cloud-based platforms including Frame.io. This is important because Frame.io introduced its Camera to Cloud (C2C) workflow last year and it’s a gamechanger. It allows cameras on set to instantly upload content to a cloud-based environment where post production can begin to edit or dailies can be reviewed. On top of that, you can actually view a livestream of what’s being shot. If you’re shooting on location, with Frame.io C2C your client can watch remotely instead of being on set.

In order for this to work, Frame.io partnered with manufacturers including ARRI, RED and Sony to integrate the cameras into the cloud environment. Now Atomos has done the same with Cloud Studio. So, if you’re using a Ninja V and Atomos Connect that’s recording footage from, say, a mirrorless camera, you can take advantage of the same Frame.io C2C workflow as the cameras from ARRI, RED and Sony.

Other companies like ZoeLog, Colorfront, Sound Devices and Teradek have previously teamed up with Frame.io. To that end, Teradek introduced the Serv 4K, a 10-bit 4K streaming device that brings production workflows to the cloud.  The device is fully encrypted and allows for4K 60p 10-bit images to be securely streamed or recorded instantly to Teradek’s own Core cloud-based platform or Frame.io.

Additionally, Frame.io announced several new partnerships—with Aaton; FiLMiC Pro, the popular video recording app for mobile phones; Viviana Cloud which integrates C2C to sound recorders that are not wifi enabled; and FDX FilmDataBox, which provides a cloud solution for camera cards and hard drives. Users can simply plug in the device and it automatically transcodes files to H.264, DNxHD, AVC-Intra or ProRes and uploads them to Frame.io. On the camera side Canon got into the cloud mix by offering new firmware on C300 MK III and C500 MK II that brings C2C to their workflow.

Blackmagic Design also floated towards the cloud with an updated storage solution, Blackmagic Cloud Store. The network storage provides up to four 10G Ethernet connections and touts a parallel memory core for speeds up to 10G on each port. Users can also link them together for speeds up to 40G on a single port. An HDMI output provides a monitoring solution for clients and two USB-C ports can be used for quick backups. Additionally, two 1G Ethernet ports are available for slower computers.

Cloud Store is ideal for post teams who need to share assets remotely without wanting to sign up for a cloud service. Everything syncs through Dropbox and Blackmagic claims there’s zero latency. Cloud Store will be available in 20, 80 and 320 TB configurations, all of which use M.2 flash memory cards arranged in parallel RAID 5 groups, allowing them to operate faster than a single card. There’s also a Cloud Store Mini version, with a single 10GB Ethernet port and 8TB of storage.

Besides Cloud Store, Blackmagic introduced DaVinci Resolve 18, with—you guessed it—a cloud-based update that gives users access to the Blackmagic Cloud website. Now there are tabbed options on the project window for local or cloud based projects.

Throughout the exhibit halls you can see the growing trend of cloud-based and streaming solutions. LucidLink showcased its global file system technology, Filespaces, that allows users to access files across any device connected to the internet. M2A Media offered a cloud frame rate converter in M2A Connect. Cinegy returned with its Channel-in-the-Cloud. AJA introduced the HELO Plus, a stand-alone device that can stream, record and deliver H.264 with a touch of a button.

Just as 4K made its way into the lexicon of popular filmmaking and creative work after some resistance, it’s easy to see cloud-based solutions are the next frontier.

For the most part, camera news was limited to broadcast and PTZ offerings including Sony’s HDC-3200, a 4K HDR broadcast camera with the same 2/3-inch sensor as its more expensive counterpart, the HDC-3500.

JVC rolled out two new PTZ camera models, the KY-PZ510 and KY-PZ510N with NDI 5 support. Both offer 4K60P HEVC SRT streaming, SMART auto-tracking, a wide 80degree field of view and are available in black and white.

On the show flow ARRI showcased AMIRA Live, a streamlined hardware solution for broadcast production with the AMIRA camera. The configuration essentially eliminates the external cables between the fiber backend and AMIRA Live hardware, creating a cleaner connection with less cables.

In the “blow your hair back” category, Emergent Vision had its Zenith HZ-10000G camera on display. It can capture 1000 fps at a resolution of 4608 x 2176 pixels in 8-bit mode. It’s ideal for different applications like virtual reality, motion capture and even sports broadcast. But as you might imagine, it’s priced outside of general consumers.

Fujinon had its Premista Lenses on display

Similar in design, they tout an 11-blade iris, industry-standard 0.8mm pitch gears that are located in the same position on both lenses, 300-degree of focus throw and a 114mm front diameter to attach matte boxes. However, there is no internal filter thread. Each lens is available in EF or PL mount and Canon also integrated both Cooke /i Technology and ZEISS eXtended Data.

Lectrosonics released three new digital slot receivers as part of its growing digital wireless family of products. The dual-channel DSR and DSR5P, as well as the quad-channel DSR4, carry many of the familiar features associated with the company, including 24 bit/48 kHz digital audio, digital encryption, analog and AES3 digital audio outputs and a variety of frequency tuning ranges.

Along the same lines, Shure displayed the ADX5D dual-channel slot receiver  they introduced last year. Compatible with AD and ADX series transmitters, it offers wide tuning, low latency and a high Density (HD) mode for when RF environments are challenging. The receiver offers true digital diversity reception on each channel, is network controllable and a wide tuning range up to 184 MHz.

After partnering with Zaxcom to allow its popular wireless system to simultaneously transmit audio and record, Deity has introduced a Timecode Box as well a prototype Bluetooth enabled slate dubbed the TC-SL1.

The TimeCode Box generates timecode and can be controlled via an app called Sidus Audio which can control up to twenty Timecode Box devices from distances up to 250 feet (76.2m). Better yet, the device has an easy-to-read display and on-board controls. An internal battery provides up to 24 hours of power and can be charged via USB-C. Generators like the TimeCode Box are ideal for those recording audio and picture separately.

There were a number of other notable products worth spending time with, including the Aputure LS 600c Pro, a RGBWW with tunable CCT from 2,300K to 10,000K; Prolych’s full spectrum RGBACL lighting fixture, the Orion 675 FS and Edelkrone’s updated motion control jib arm, the JibONE v2. The refresh includes better wireless control and longer range and has an OLED for instant feedback. Speaking of OLED, SmallHD launched OLED 27, a 4K OLED monitor.

It will be interesting to watch what unfolds for the rest of 2022. Another industry trade show, IBC, hosted in Amsterdam, is around the corner. In all likelihood it will introduce additional “clouds” in our technological skies.