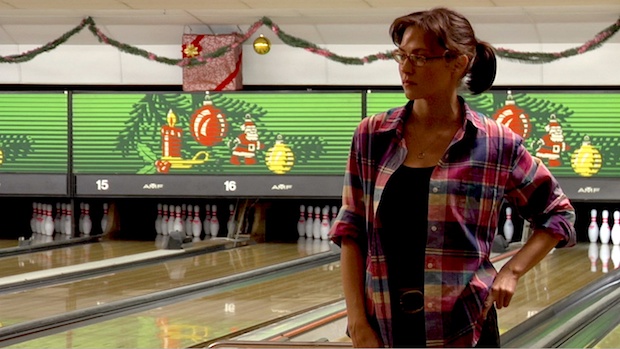 by Brandon Harris
in Director Interviews
on Jul 28, 2010

A young woman works at the shoe counter at a Pensacola, Florida bowling alley. Having abandoned the ambitions of her youth, she takes care of her ailing father, who painfully struggles with cancer. With the return of a rival from high school into her long-standing social circle, the stillness that has taken over her existence breaks, leaving her to consider the possibility of a new direction, one which seems tantalizingly close and yet ever elusive. This is subject matter than might seem too comfortably within American independent cinema’s wheelhouse, but in thoughtful hands, even the most seemingly pedestrian yarns can contain multitudes. A mid-season candidate for low-budget discovery of the year, Brett Haley’s The New Year is a quietly riveting, old-fashioned AmerIndie, a character-driven slice of Florida panhandle life made for four figures that marks the coming-out party for Trieste Kelly Dunn, who turns in a performance that harkens back to past breakthroughs by other girl-next-door types escaping the dead-end circumstances of their sunny, coastal locales. (Think Ashley Judd in Ruby in Paradise or Lauren Ambrose in Swimming.)

Skipped over by Sundance and SXSW only to surface at respected regional fests such as Sarasota and Nashville, the film is a feature directorial debut for Haley, a Pensacola, FL native who financed, produced, directed, co-wrote and co-photographed. He even downloaded the P2 cards. Between takes no less. Despite cutting his teeth as an assistant to the director on studio0subsidized, highly formal Indiewood projects like The Road and Reservation Road, Haley counts John Cassavetes as his primary aesthetic influence, which goes a long way toward explaining the low-fi immediacy of his film. The New Year opens at the brand new reRun Gastropub Theater in Dumbo, Brooklyn this coming Friday. Filmmaker: What provided the initial concept and inspiration for the project? Did you always conceive of this film at such a low budget?

Haley: The inspiration came totally out of left field and yet somewhat naturally. I’ve told this story a few times, but it is just what happened. I was on a Amtrak train from New York to Philadelphia, and I saw this bowling alley in the Middle of Nowhere, Pennsylvania. It really stood out to me, and the idea grew from there, a story of this girl who takes care of the shoes at a bowling alley. It was a world I was really interested in, and I wanted to find out how I could tell a story about it. The idea of her coming home to take care of her father who has cancer came to me somewhat naturally from there. It’s not something from my personal life, it’s just something that popped into my head.

Filmmaker: You had a co-writer on the film who also produced the project with you.

Haley: I called my sister-in-law, Elizabeth Kennedy, who’s my co-writer, and I said, “Look, I want to write a movie about this girl who works in a bowling alley, and I want to write it for Pensacola, where I grew up. I’ve never written a film where the main character is a female. Will you help me write it?” She thought it was a good idea, so we started going back and forth. It worked very naturally. It was a good partnership. We conceived of it very economically. That was paramount in the writing. I’m not going to write anything that I can’t pull off. I took a few risks, but it was very apparent to me to write what I could do. How am I going to do this? How am I going to physically pull this off? Those [questions were] always at the front of my mind and were the reason the film is at the level that it’s at.

Filmmaker: Were you writing for locations you knew you could get for free?

Haley: Yeah, pretty much. The bowling alley was the biggest thing. That was the biggest risk we took. All the other locations I was pretty confident about. I’m going to shoot at my parents’ house, I’m going to shoot at my friend’s house, I know someone who works at the hospital, the people that work at the bar, this and that, but the bowling alley was a real risk. I wrote it for that bowling alley, Cordova Lanes, and I really wanted to shoot there — that was the bowling alley I grew up in. It took some sweet-talking, but they were really generous and giving. They opened their doors to us and helped us and helped Triste learn how to bowl.

Haley:  We spent $5,000 on production. I flew everyone down to Pensacola. That was the biggest expense: travel. I found one of the most expensive things was a rental car. We had to rent a vehicle for our equipment and a minivan to shuffle everyone from location to location. The gas costs that those vehicles entailed was also significant. Travel was followed very closely by food. We got a lot of free food; I think that’s the only reason food isn’t the number one expense. All the equipment we got for free, all as favors, and all sort of used and borrowed equipment. Obviously everyone worked for free.

Filmmaker: Even the sound guy?

Haley: We didn’t have a sound guy. My actors, when they were shooting, would hold the boom. We were all just like a unit. They were all in from out of town. We were just like a unit going from location to location.

Filmmaker: So there was no double system sound? You were going directly into the camera?

Haley: We had two cameras. We shot Panasonic HVX. We went directly into the camera. There were two booms, one for each camera. I really like sound coming from the boom; I’m not a fan of wireless mics. We didn’t have any, but even if we did, I think I would have avoided them. I don’t like the sound quality, at least from what I’ve heard. If you don’t have a professional sound person on set, you can really screw up pretty easily with lavs. The stuff coming right into the camera was pretty good. My post-production sound guy was like, “This sounds really good for an independent movie, one of the best I’ve heard.” I was like, “That was all actors holding the boom.” We had really long XLR cables, and we just made it work. We were all over that bowling alley. You get some funky situations with the two booms and the two cameras and the long wires. It gets kinda complicated, keeping it practical for the shooting.

Filmmaker: You got a terrific performance out of Trieste Kelly Dunn. It reminded me a bit of Ashley Judd in Ruby in Paradise, both in terms of the milieu she’s inhabiting and the point in her career that she found this character in. She has an authenticity that’s striking, almost non-actor like. She had never spent any time in this part of Florida before?

Haley: She’d never been to Pensacola. She showed up a few days before we started shooting and that was her introduction to the world. I think Ashley Judd is one of the most underrated actresses working today, so that’s a real compliment to Trieste. They both have a naturalistic quality to them. It’s something you can’t teach; it just is. Real movie stars, they just have this thing, you can’t put your finger on it exactly, this quality that they have, but you can call it naturalism for certain performers. Trieste has that. She listens, and she takes direction well and she understands what’s going on. I found it to be a very copacetic. I don’t like to be an overbearing director. I like to let my actors be and breathe. Let them sort of figure it out for themselves. Trieste and I had talked about this a lot. It was more about the environment we were creating. If you set up a very comfortable, calm environment for the right actors, they’re going to do good work. I feel like Trieste really blossomed in that environment we created. There was no pressure on her. I told her, “You just take your time and do what you need to do. If it’s wrong I’ll let you know. We’ll get there. We’re not in a rush.”

I feel like everybody in the film has that naturalistic quality that I really like. Even if you’re doing a genre film, a comedy, anything that’s heightened, I think naturalistic performances are important. My taste hews towards the naturalistic, and I wanted the performances to reflect that. I think she set the bar really high for the whole film, and everyone else did their part to match that and support her.

Filmmaker: How long did you spend with your unit in Pensacola?

Haley: We were down there for three weeks. We shot for 12 to 14 days. A lot of those days were not full days. Two cameras really helped. There were a few days where we would only shoot a few hours.

Filmmaker: Did you use any locals who were non-actors?

Haley: No one in the film is a non-actor. They aren’t actors for a living. Many of the actors in this film, such as the manager at the bowling alley or Glenn, the guy who works at the bowling alley, or Sunny’s dad, who’s played by Mark Peterson, these are people who live in Pensacola who I was in various community theater shows with. Basically I wrote the parts for them. Everybody except for Mark still acts. Mark has stopped acting, he’s retired. I convinced him to do this one last thing, and, thank God, he turns in a really great performance. I’m really proud of all those actors. It just goes to show you how many great actors are out there who make a living doing something else besides acting.