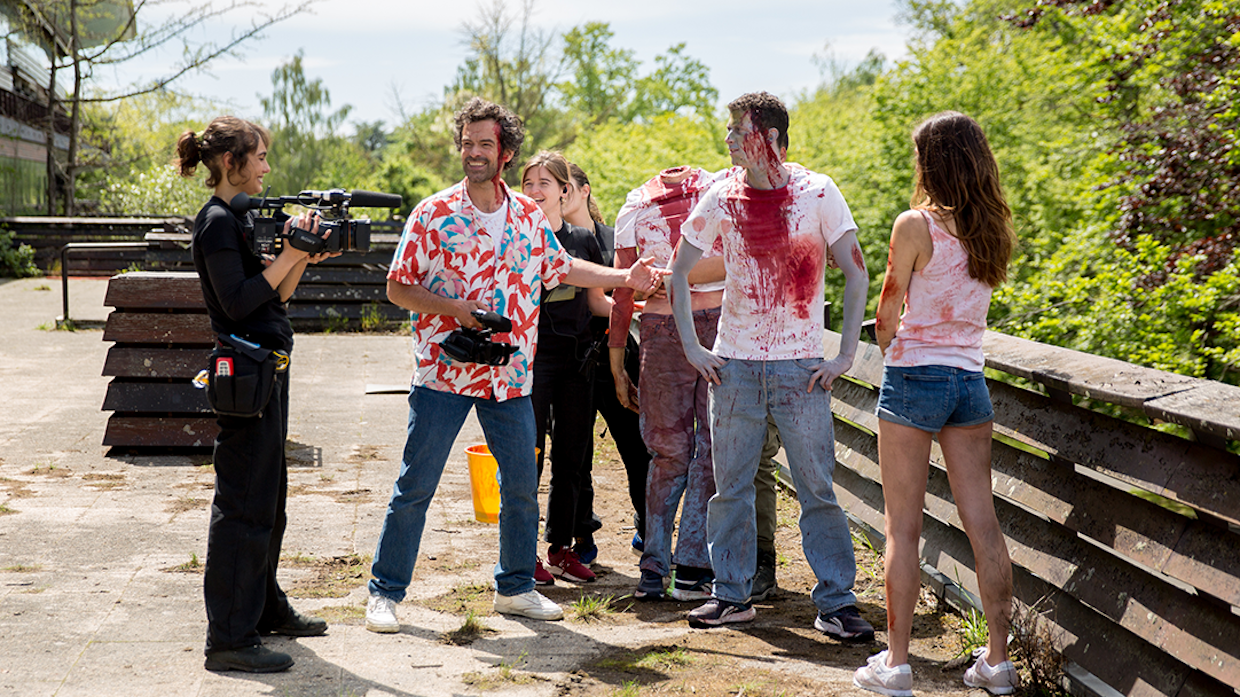 Ticketing catastrophes, internet outages at the badge claim station, and complimentary gold buttons featuring lame movie-related quotes from uncited sources in either French or broken English—“I swear to you: I had an eye contact with Timothée,” reads mine—in sans-serif font atop the number 75. A quick Google search tells me that the traditional gift to celebrate a 75th anniversary is diamonds, but two days into Cannes’ three-quarter century extravaganza I might’ve guessed it was lead.

The inauspicious Opening Night Film selection, Michel Hazanivicius’s Final Cut, was in lockstep with the festival’s other launch fumbles. Scooped up by Thierry after the film pulled out of Sundance’s Midnight section earlier this year in response to that festival’s obligation to go online amidst the Omicron surge, the film’s French title was ultimately changed in late April from Z (comme Z) to Coupéz! after the Ukrainian Institute informed the festival that the former would be inappropriate now that “Z” has become aligned with pro-Kremlin symbology. The title was changed (and thousands of one-sheets re-printed for sidewalk marketing throughout France in a matter of days), though you’ll have to wait until the end credits to see it; the film still opens with a massive, bloody ‘Z’ splashed across its opening image, which seared our retinas mere minutes after Volodymyr Zelenskyy delivered his cameo speech at the end of the opening ceremony.

Then came 110 minutes of Hazana-viciousness. Final Cut is a remake—and at this point, it’s safe to say remakes are this Artist’s “thing”—of Ueda Shinichiro’s nearly instant cult classic, One Take of the Dead (2017), and re-make it he did indeed. The first act of Final Cut, in which we watch what is essentially a standalone, 35-minute, single-take short about the production of a zombie film going all kinds of wrong when actual zombies invade the set, is virtually identical to Ueda’s original. The duration is the same; the plot beats are the same; most of the lines, the same. Even the character names are unaltered, which means that the director, Higurashi, is portrayed by Romain Duris; Bérénice Bejo plays his Krav Maga-practicing wife and make-up artist, Nao; and Finnegan Oldfield is the film’s pompous lead actor, Ko.

There’s clearly intentional postmodernism at play in this and most other decisions here, as the film doubles down on nearly every metatextual element (of which there were already many) in the Japanese original—an “original” that was charged for plagiarizing Ryoichi Wada’s play Ghost in the Box, resulting in a settlement for Wada (not to mention a writing credit in Hazanavicius’s new version). The decision to copy-paste Japanese names and mythology atop a mostly white cast is clearly misguided, though the film narrowly gets away with it when it takes a step back in its second act, at which point it becomes a film about a dim-witted filmmaker (Duris) being hired to direct the remake of the short film that leads off One Cut of the Dead. (Why? Because it would make a lot of money, of course!) Characters in this portion of the film call out the decision to keep the Japanese names unchanged as racist, and that’s to be taken in stride with the film’s ultimate critique of mainstream cinema’s understood ineptitude. The one-take is equated with authenticity, Oldfield drops in one-liners decrying rampant consumerism and capitalistic greed, and Hazanavicius’s largely superficial infatuation with Godard—which as we know resulted in his 2017 Palme d’Or contender, Le redoutable (released as Godard Mon Amour in the US)—now makes just a bit more sense.

The final act of Final Cut returns to the carbon copy imitation of One Cut of the Dead, at which point the film at least becomes a bit of fun (all credit to Ueda, or Wada—it’s hard to tell at this point). We now witness the behind-the-scenes rationale for myriad awkward moments in the first act (e.g wheel-spinning improv conversations—”Are you okay?” “Yeah…you?” “Yeah I’m fine…what about you?” “I’m okay. You?” and so on ad infinitum—existing because another actor was delayed for some reason or other), and the extent of the production team’s complete incompetence. Final Cut means to skewer (again, as Ueda’s film did before him) the follies of long-take cinematography, and therefore, per its own argument, ambitions for a more authentic cinema. Which is to say, the movie strives to be stupid, so we’re not supposed to hold that against it. I will anyway, and I’ll do so while questioning a film that intentionally bungles its entire first half-hour for the sake of making an obvious point about money-driven creative ventures. It’s admittedly not far off from the studio-/Robert McKee-imposed bad endings of Robert Altman’s The Player (1992) or Spike Jonze’s Adaptation (2002), though I’d argue that there’s some wisdom in the decision to place the bad part at the end, after we’ve come to trust the voice and vision. When you open the show with a mess, it’s difficult to have faith in what comes next.