ROONEY MARA IS THE GIRL WITH THE DRAGON TATTOO

Rooney Mara, The Girl with the Dragon Tattoo 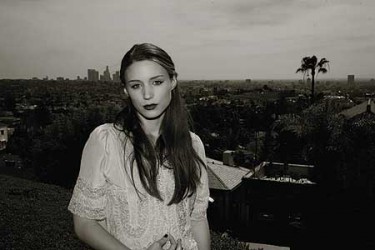 Rooney Mara — profiled in Filmmaker last summer when we selected her for our “25 New Faces” list — has won out in the most public casting process I can remember in years for the lead role as Lisbeth Salander in David Fincher’s adaptation of The Girl with the Dragon Tattoo.

It’s interesting to read some coverage that has called her an unknown and then to compare the comment to my lede in last year’s profile, reprinted below. She talks about why she got into acting, her love of John Cassavetes, and her non-profit organization, Faces of Kibera.

The careers of actors and actresses are possessed of their own internal logic. An actor’s breakout in a critically acclaimed starring role is usually the culmination of a process that’s been witnessed by producers, directors and casting directors for years before. So when we surveyed people in the industry about acting talent for this year’s list, one not-yet-household name kept coming up: Rooney Mara. Said a casting director: “She’s got great presence and wit, and she can do both comedy and drama.” “Women love, guys love her,” one producer said to me. “We cast forever for her character, and she just came in and nailed it.” Audiences will have a chance to discover Mara’s talents because she has supporting roles in three independent or specialty films coming out this year. First she’s opposite Sam Rockwell in the Sundance pickup The Winning Season, she co-stars in Adam Salky’s Sundance Competition pic Dare, and she’s also in Miguel Arteta’s upcoming Youth in Revolt with Michael Cera.

The New York-born, L.A.-based Mara says she was inspired to act by “watching musical theater and old movies that my mom would throw on, like Gone with the Wind, Rebecca, and Bringing Up Baby.” Of her acting inspirations — current ones, at least — she cites Gena Rowlands: “I am just mesmerized and inspired by her. I’ve been watching A Woman Under the Influence and Opening Night over and over. That would be a dream — to work with a filmmaker like [John Cassavetes].” And then there’s what she’s shooting now: Samuel Bayer’s remake of A Nightmare on Elm Street, in which Mara has the starring role of Nancy. “The character Nancy in our version of Nightmare is completely different from the original,” Mara e-mails from the set. “Sam likes to call her ‘the loneliest girl in the world,’ and I don’t think he is far off in saying that. Nancy is very disturbed by her childhood and as a result of that she has closed herself off to the world and to people. But throughout the film though you see her getting stronger, coming out of her shell, and by the end she gets to face herself and see what she’s really made of.”

Mara’s other project is an ongoing one: Faces of Kibera, a non-profit that helps orphans in Kibera, Kenya — Africa’s largest slum — by providing housing, food, medical and psychological care. Mara founded the organization after traveling to Africa to do volunteer work. “I fell in love with a bunch of the kids there, one little girl in particular and I just knew that I could and needed to do something more to help them. I am planning on going back for a month or two once I wrap Nightmare. It’s hard to balance both worlds because they are so completely opposite. I love acting, but you spend enough time imitating life and getting wrapped up in this industry you tend to forget about the real world. I am happy I get to do both.”