Into The Splice : Micmacs 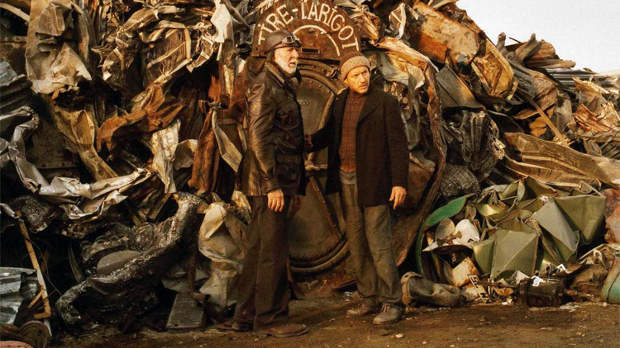 The late afternoon is warm, the locusts screaming from the trees. The sun makes everything as golden as the poster for Micmacs, a movie that I’ve avoided because the spell of Jean-Pierre Jeunet’s earlier movies (Delicatessen, The City of Lost Children, and Amélie especially) is so powerful and magical. I didn’t want Micmacs to break that spell, but I needn’t have worried. Some reviews have accused the film of being style over substance but really, when it comes to any form of storytelling—in movies, in literature, in art—is there a difference? Usually when critics accuse a movie or novel of being too stylish or too surface-y or too full of visual or narrative tricks what they mean is that they wish it were more realistic. But “realism” is as much a stylistic choice in narrative cinema as is surrealism, or any other aesthetic that’s not realistic. A movie like Winter’s Bone is praised as being realistic, but its vision of reality is as staged as Knight and Day.

In fact, you could argue that a fantastical movie like Micmacs, with its sprout-shooting visuals and sudden shifts in tone is deeply grounded in realism because it captures the way the mind works, unexpectedly leaping from the present into the future and back into the past. Narrative portrayals of realism are always fantasies of realism. Realism itself is hardly ever “realistic” as it is conjured in movies.

But what about Micmacs? My companion and I (a lovely woman named Lisa) parked downtown, and walked. A disheveled man with a shredded pant leg stood between two police officers on bicycles, trying to explain something. The officers smiled. They seemed calm. But something told me they were worried. Lisa and I agreed that the temperature of the sidewalk must be well over 100 degrees. A woman worked on an ice cream cone that was melting down her hand. The theater—a beautifully restored movie palace from the silent era—glittered in blues and yellows in the sun. Some people in line in front of us were Platinum Club members and this caused some confusion: the membership apparently entitled them to free entrance with the purchase of one ticket. There was a stalemate between the ticket-taker and the head of the group. Why buy a ticket, we’re Platinum Club members? But eventually the ticket was bought, and order was restored in this sleepy college town. I think Lisa and I had both silently agreed not to sit next to the Platinum group in the theater, but it didn’t matter because they movie started early, and when we entered it was completely dark.

Sometimes you can tell right away if a movie’s going to be good, and this movie felt good. Like a Michel Gondry film, Micmacs is outfitted with old-school Mouse Trap inventions that stutter and spark and, miraculously, work. I whispered to Lisa that the film seemed nostalgic for the analog. She whispered back that that’s what I said about everything. I whispered that in a lot of French films there seems to be a love affair with small mechanical objects. She whispered that that certainly wasn’t true of Irréversible. 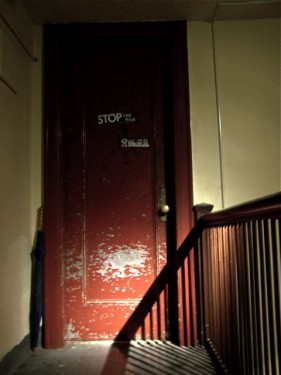 About half-way through I left my seat to sneak up to the balcony to try to get into the projection booth. I never get into the booth when I try, though I have never just asked. I don’t want to be told no. Like I said, it’s an old, enormous, majestic theater, and the balcony is high up. In the balcony, with its low railing, I felt dizzy like Jimmy Stewart in Vertigo. No one was sitting there. I moved even higher up, back against the cool wall, and the light from the projector came through a pillbox-like hole just a few feet above my head. There was an exit door at the far end of the aisle. It opened into a cracked cement stairwell that led, in one direction, down to the lobby and, in the other, up five stairs to a landing with a wooden door at the end. An umbrella leaned against the door frame. (There hasn’t been rain for weeks.) It reminded me of something out of Eraserhead. It was a spooky door. I could hear the projector whirring behind it. I wanted to knock but fear, as usual, overtook me. I snapped a few pictures, and threaded my way back through the dark.

In the movie, Bazil and the contortionist La Môme Caoutchouc are falling in love. I return to Lisa, and she whispers to me that she thinks that Micmacs is about the difference between people who actually make things (Bazil and his adopted family) and the people who merely direct the making of things (the two villainous arms makers and merchants). I ask her if that means film directors are like arms dealers. She hands me the popcorn bag, which is empty. The orange glow of the movie is similar to the glow in The Fantastic Mr. Fox, and in a way both are two halves of the same movie, and they really test you, these films, test to see if you are still human, to see if you have not been corrupted by cynicism and bitterness.

There is a scene near the end of a movie that features a simple dress spinning and moving on a homemade contraption. The dress is full of air and light and moves with surprising grace across the screen. There is a sweet sadness to the sequence, and it’s hard to know why. A few rows in front of us, a man’s cell phone screen casts a momentary blue light beneath his bearded face. The film is almost over. Lisa and I, we can feel the end coming. I glance back up at where the projector is and wish I had been braver. The movie has inspired me to be brave. To hatch a plan with comrades and take down some force of evil in the world. Even back outside, dear reader, in the heat and sun, after the movie has ended, this wish does not fade. And for a while—at least in my own mind—I am a better man.