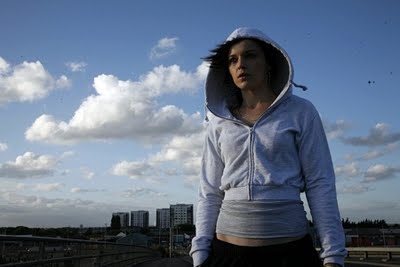 Long before she became an Oscar-winning filmmaker, Dartford native Andrea Arnold settled on a path that was anything but conventional. After moving to London in the late ’70s, she worked as a dancer on Top of the Pops, and later became a TV presenter in Britain for Saturday-morning kids’ programs like No. 73, Motormouth, and the enviro-awareness series A Beetle Called Derek. Never entirely comfortable in front of the cameras, Arnold was always writing, logging story ideas and character sketches. She left television in the early ’90s, went to film school, and made two shorts that screened at Cannes. In 2003, her 26-minute short Wasp, about a chronically stressed, emotionally desperate single mother living in a Dartford housing project, nabbed an Academy Award for best live-action short. Then came Arnold’s Cannes Jury Prize winner Red Road(2006), a raw, suspenseful, ingeniously constructed personal drama set mostly in a dark CCTV surveillance office in Glasgow. It was the kind of film—moody, absorbing, nerve-jarring, expressionistic—that made you sit up and take notice of this remarkably assured new filmmaker, and wonder where she would direct her energies next.

With Fish Tank, Arnold revisits the distressed, working-class locales of her earlier work, telling the story of Mia (Katie Jarvis in a confident and steadfastly believable performance), a 15-year-old girl growing up in a nondescript council estate in Kent. Angry, alienated from her female peers, and frustrated with life at home—she’s always at odds with curvy-cougar mom Joanne (Kierston Wareing) and petulant younger sister Tyler (Rebecca Griffiths), the three of them continually trading obscenities and cutting remarks—Mia finds peace in solitary self-expression, dancing freestyle to hip-hop tunes in an abandoned flat. Things change when Joanne brings home new boyfriend Connor (Michael Fassbender), a strapping presence in the all-female household who wins hostile Mia over with his easygoing, paternal airs, giving her the respectful attention and flattery she craves, but also stirring the volatile teen’s first exhilarating pangs of desire. Arnold stays skin-close to Mia as the story develops, DP Robbie Ryan’s camera tracking her every fitful movement, whether she’s head-butting a rival, fleeing a menacing pack of boys, or woozily regarding Connor as he tucks her in. Even when their rapport takes on a troubling cast, Arnold never hits an obvious beat, which makes Fish Tank‘s mix of hard-knock realism and tenderly observed adolescent portraiture even more impressive (it won the Cannes Jury Prize last May), evoking the kitchen-sink-style Brit dramas of yesteryear as well as an angstier, often dizzyingly sensual spin on the coming-of-age tale that feels utterly fresh and contemporary.
Filmmaker spoke with Arnold about her faith in cinema, the simple act of observing everyday life, and why her New Year’s resolution is to dance every day.
IFC Films releases Fish Tank on Friday. 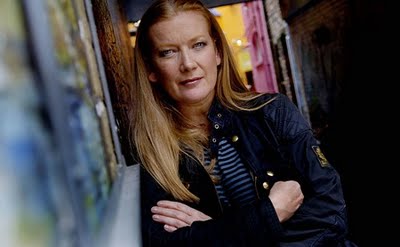