by Scott Macaulay
in Festivals & Events, Filmmaking
on Oct 2, 2010

I was very excited to see the list of Woodstock Film Festival winners over at Indiewire. Two Filmmaker favorites picked up the top prizes. You’ve read about Jeff Malmberg’s Marwencol on the site before (see Alicia Van Couvering’s blockquote interview with the director here), and if your memory is good you’ll remember that I picked Stranger Things directors Eleanor Burke and Ron Eyal for our 2009 “25 New Faces” after seeing the rough cut of this very same feature. I think this is a beautiful, delicate, and extremely well directed and acted film, and I’m really happy that it’s now entering its festival life on the backs of this recognition. 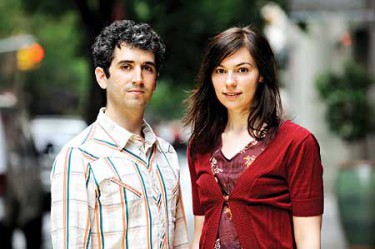 “At some point in her life my grandmother was a bit of a wanderer,” explains New York City-based but U.K.-born Eleanor Burke. “She was attracted to the beach and the seaside, and she was itinerant at different times of her life.” Says Burke’s partner, Ron Eyal, “We thought about that idea and then imagined Adeel [Akhtar] in that role [of the wanderer].” With Akhtar, another lead actor, Bridget Collins, and a small house belonging to a family friend near Hastings, U.K., Burke and Eyal riff on the themes of homelessness, loss and human vulnerability in their delicately beautiful debut feature, Stranger Things, currently in postproduction.

Stranger Things tells the simple story of a vagrant, played by Akhtar, who breaks into the home of a young woman’s (Collins) recently deceased grandmother. Of course, a friendship follows, but Stranger Things‘ best qualities can’t be captured in a plot synopsis. It’s a small-scale story sensitively attuned to its fine actors as well as broader themes of responsibility, loss and community.

Burke and Eyal, who are engaged, met at NYU Film School in 2003. “We’ve worked on a lot of projects together,” Burke says, “like documentary things I shot and Ron’s directed. This was the first time we co-directed something, but we were always on the same page.” “Before we shot,” continues Eyal, “we got advice from the faculty at NYU, who all said we should split it up,” with one director handling actors and the other overseeing the camera. “Eleanor’s background is as a d.p., and we knew we wanted her to shoot it, but really quickly we learned that things didn’t have to be that strictly divided. We both worked with the actors and I was involved with setting up shots. It was very fluid.”

The couple worked at a homeless shelter in England while preparing the film. “There were people who were very vulnerable and who were in poor mental health and then there were recent immigrants who didn’t have a place to go,” says Burke. “We would prepare meals for them and just sit and talk.” “It’s stuff you just take for granted, like people enjoy eye contact and don’t always get it from people,” adds Eyal.

Burke and Eyal say they have other films to do together, but first they’ve got to finish Stranger Things, which recently completed the IFP’s Rough Cut Lab. “We both like to tell stories about people on a very human level,” says Burke. “We were hoping to make something that would deal with real emotions and real moments.” Concludes Eyal, “It’s kind of a tiny drama but we hope it can connect with people.” — S.M.