“12TH AND DELAWARE” AT STRANGER THAN FICTION

by Mary Anderson Casavant
in Filmmaking
on Nov 17, 2010 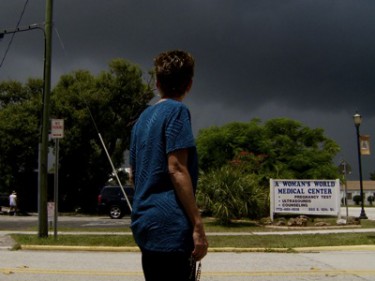 When I was in a high school in Tennessee, a classmate of mine started crying while discussing a short story about Vietnam. Through her tears, she explained that the soldiers battling for their lives reminded her of all the unborn babies who’d been killed that week. What those of us not on the frontlines of the abortion battle often forget is that for those who feel passionately on the subject, abortion is not just an issue, it’s the only issue.

In 12th and Delaware, last night’s entry into the Stranger than Fiction canon, directors Heidi Ewing and Rachel Grady take us inside a pregnancy crisis center in Florida where some extremely dedicated people try to convince women not to terminate their pregnancy using ultrasounds, a little misinformation and a heap of guilt. Across the street, an abortion provider peers through the windows and shakes her head at both the center and the protestors who scream at her patients, trying to convince them there is another option, right across the street.

Made with what programmer Thom Powers called “a real artistry and sensitivity to both sides,” 12th and Delaware is a glimpse into a conflict that rages on the streets of America, a war that one of the pro-lifers fears “won’t end pretty.” It’s is currently available OnDemand on HBO.

I spoke to Grady before the screening.

Filmmaker: Your film opens with almost no explanation about where we are or what’s going on in that location. Can you talk about this choice to just throw the viewer in?

Grady: It was a little bit of form and function. The story was about a place that was sort of designed to perhaps confuse or not be totally transparent about what its agenda is. It made sense to create that experience for the viewer. We wanted the first ten minutes to be vague as far as location and what they were trying to accomplish.

Filmmaker: It also mimics what someone who wandered into the center thinking it was an abortion clinic might experience.

Grady: Yeah, in fact, we witnessed that very thing and put that into film. That is what a client may experience when they walk into the pregnancy care center. It’s a slower reveal as to what their actual agenda is.

Filmmaker: Another interesting choice is that even though you’re portraying two sides on the same issue, you don’t really interweave them. We’re almost 40 minutes in before we even meet anyone at the abortion clinic.

Grady: There were some unusual choices we made that were new for us. The first was that we were in one corner for almost an entire film. The second was that for the first half of the film, we’re in one camp’s point of view, and in the second half we’re in the other. I think we wanted a balance as far as time and experience that the viewer has so that they can come away with their own conclusion.

Filmmaker: How did you approach the women you were filming?

Grady: Surprisingly, a lot of women were willing to let us film this incredibly intimate counseling session they had. It was kind of a game on our part, but about 50 percent of the women agreed to it. It was a bit tricky. We didn’t meet them before they walked in the door, even at the abortion clinic where they do make appointments. They didn’t want us to reach out to people in advance. We waited for the subjects come to us. In retrospect, something that’s not surprising is once we filmed them we never saw them again. We’d try, but they basically wanted to put this experience behind them.

Filmmaker: What attracted you to making an abortion story?

Grady: What happened first is that we were looking for a crisis pregnancy center, the pro-life alternative to an abortion center. We learned they existed through making Jesus Camp. One of our subjects’ mother worked in one, and we tried to get access to one…There have definitely been films done in abortion clinics, but what’s more unknown is these crisis pregnancy centers. We felt that the abortion clinic that happened to be across the street would make the story that much richer.

Filmmaker: How long were you in production?

Grady: We filmed off and on over a year. The feeling we wanted people to come away with is a year in the life of this location, which on some levels is extremely ordinary and banal, and on the other side is wild emotional chaos. They have both those things going on, so we’re hoping that we convey that in some way.

Filmmaker: How did you know when to stop filming?

Grady: It’s just an instinct. What usually helps is starting to edit and realizing where your holes are. Some of it is budget-driven. That’s the thing with documentaries is there’s no script, and you’re filming life. Life doesn’t ever end.

Filmmaker: How did you approach fundraising?

Grady: HBO commissioned it based on a conversation we were having. We were pitching other things to them, and the conversation led to these pregnancy crisis centers, and they expressed an interest and encouraged us to develop it. It was collaboration from the very beginning.

Filmmaker: I got the sense watching this movie that there’s absolutely no way these two sides will ever understand each other.

Grady: That’s unfortunately true. These are monumental issues. It’s not even about rights. It’s about gender roles and what women and women’s role in the world…I don’t think that there’s going to be some huge agreement in the world on that.