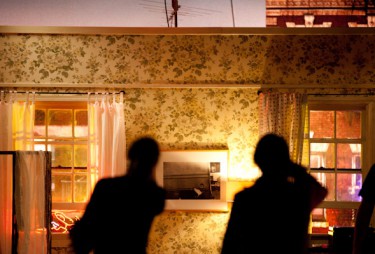 ON THE SET OF NOAH BUSCHEL'S LATEST

I guess somewhere, in the back of my mind, I knew it could never last. I wanted to make art films. But it was just a matter of time before the realities of life intruded. I am thirty-two now. Most of the people I met in the independent film world are long gone. They are movie stars or cable directors or waiters or teachers. I don’t know them anymore.

It was raining and it was hot on the river. I was crashing on my friend’s couch. Me and my fiancé had just split up and I was having a nervous breakdown. In between nightmares, I thought about how I could get back on my feet maybe. There was that little, strange two-hander script — the one all the agents and managers had told me not to do — in fact, they wouldn’t rep me if I did. I had written it while living in a Tokyo motel for a week — a  couple years back. The actors, John Ortiz and Martha Plimpton, were attached.  It was about an agoraphobic. And she falls for her plumber.

The movie looked set to shoot for around a million dollars. There was only one problem. I was having trouble leaving my friend’s apartment. I missed meetings with investors. I was late getting everywhere. Ortiz gave me pep talks, but there was only so much he could do. Eventually the project kinda melted away. I didn’t really care.

Day after day and night after night, I would lie on my friend’s couch. Mostly I just stared at the ceiling and drank Seltzer. Sometimes I could focus enough to watch a movie on my laptop. I started watching some of Ozu’s movies. They were soothing, but not in a trivial way. They were made by a heart-broken person, I could feel. But a heart-broken person who hadn’t given up. Simply, he had  compassion.

I kept watching Ozu’s films. The static camera. The calm clarity. Some small fire was starting to glow in me again. Some small fire to make a movie. But not with serious money or a big crew or nothin’ like that. In fact, I didn’t even wanna move the camera. I would shoot it like Ozu, all still frames. I had no energy for fanciful flashes or moves. This would be a movie that wasn’t trying to do anything. It would just be what it was. And it wouldn’t  be some kind of indie that anyone at IFC was looking for. Wouldn’t be like Breaking Upwards. No one would see this thing. And if anyone did see it, it certainly wasn’t going to lend itself towards office cooler talk or Pabst Blue Ribbon talk. Or any kind of talk at all. This would be the kind of movie you’d probably only find if you were in a lot of trouble, crashing on a friend’s couch.

We shot it in a warehouse in Burbank. My old buddy Megan Cotts, who had never art directed a film before, built the agoraphobic’s New York apartment. It was the only set I’ve ever seen that made me emotional. Ryan Samul, the cinematographer from my last film — he came in with confidence and a band of sweet-hearted pirates. They were the finest crew I’ve ever worked with. Ryan so naturally took on the task of not moving the camera — I started to wonder if he was actually an old Japanese man named Jinbe. Scott Larkin, who I’d known a long time ago as a 2nd A.D., was now a great 1st and our captain.

The producers, Sam Housman and Louise Runge, trusted me. And they made sure double shots of espresso were always around. And they generally made the whole affair seem like a fun, dark picnic. Like a party in a cemetery at night. Michaela Conlin, another old friend, produced with Sam and Louise — her first time producing. Though you would never know it. With Michaela around, I felt completely protected.

Anyways, for nine or ten days or something — we just made this film in this warehouse. I’m not even sure what the title of the movie is. Marin Ireland and Paul Sparks were the only actors in the movie. And we all got to watch them do their thing. I hardly even had any notes for them. They brought heavy spirit and were wonderful. In a couple years they’ll probably both be real renowned.  Ryan Samul will probably only be making movies with ten million or over budgets. Megan Cotts will only work with James Cameron. And that’s okay, that’s okay. But for about a week and a half, I remembered why I got involved in movies. I was nineteen and wanted to say something. I was naive.  I didn’t know that the foundation of the movie world was made of sex, money, power, and fame.  And I know that now. And I’m sorry if I wasted anyone’s time in not knowing it. But for just a little while, in Burbank, all the ugliness faded away.