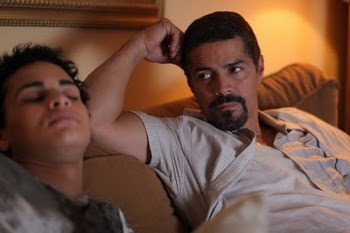 The biggest surprise for me was how hard it was to cast the role of Michael. During the months of writing and toiling over every beat, I never imagined that the success of our film would come down to finding a miracle child who would wow audiences the world over. Gun Hill Road is the story of a Latino father who returns home after three years in prison to discover his teenage child Michael exploring sexual identity and an alternative lifestyle in ways he can’t possibly comprehend. Casting the other two leads proved effortless. Esai Morales (La Bamba, NYPD Blue) and Judy Reyes (Scrubs) loved the script and signed on right away. As for the role of Michael, we spent months scouring the streets of New York City on a search that would eventually have a favorable ending, but the process itself was absolutely grueling.

I knew from the start I wanted to cast the role nontraditionally, that is, outside of the normal means of finding talent through an agent or casting director. In order for the film to be successful, I needed to find the genuine article. I sought to bring a level of authenticity to the screen and support it with seasoned professionals on either side so the resulting drama would feel real and earned.

The obstacle came with the search itself. The assumption on my part had been that everyone wants to be in the movies, that it was just a matter of finding the most talented prospects. A harsh lesson awaited me. Not everyone wants to be in the movies: especially not teenagers whose lifestyle lies outside of the mainstream. The idea or the excitement was initially there when we would approach them and mention the project, but when it came down to following up, responding to messages, attending an audition, a callback, etc. (the normal ways of seeking talent), they didn’t show up. I didn’t understand it. And the few that did show lacked the magic necessary to pull off the role. I pulled my hair out for weeks, kicked myself for writing myself into a hole, and I blamed it on the youth. We never gave up, though. We stumbled in and out of 18-and-over nightclubs at 3 a.m., attended every youth organization and function you can think of. And eventually, we found Harmony. The stars had aligned themselves. Harmony Santana, who landed the role of Michael, was working at a booth at a parade in Queens. Harmony was the right age and type we had been looking for, showed up on time to the audition, had that special something ripe for molding, and was dedicated to learning the craft of acting. I thank my lucky stars that now I can actually sit back and tell you the tale. In the end, it was just a matter of timing and lots and lots of patience.