“HOW TO DIE IN OREGON” | director, Peter D. Richardson 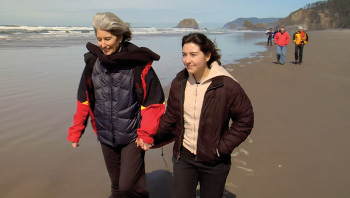 How to Die in Oregon tells the stories of terminally ill Oregonians as they decide when, and whether, to end their lives at the time and circumstance of their own choosing under Oregon’s Death with Dignity Act. What inspired me to make the film was the desire to explore the profound choices an individual would have to make in order to take the life-ending medication. I knew that telling this story was going to be difficult because it would require extraordinary access and a willingness to participate in the film, not only on the part of an individual but sometimes an entire family and, critically, a physician. It wasn’t until two years into filming that I found what I felt to be this critical combination of characters to tell every aspect of the story. Cody Curtis, who had been diagnosed with terminal cancer, and her family gave me access into their lives and insight into the choice Oregonians have at end of life.

When Cody’s physician Dr. Morris agreed to be on camera — first to film regular checkups with Cody and eventually to provide an on-camera interview — I was very surprised. Up until that point, in both casual conversation and on-camera, Cody had only referred to her as “Dr. M” in order to preserve her anonymity. Physician aid-in-dying is still an immensely controversial issue, especially for doctors, so it was at great risk that Dr. Morris agreed to participate. My reaction to the news was one both of excitement and a great sense of responsibility: a responsibility to get Cody and Dr. Morris’s story right, both for them and for the many others who would eventually see and learn from it.

I think physician aid-in-dying is likely to be the next major medical/ethical issue we confront as a nation. An aging baby boomer population that will desire greater control and choice in end-of-life decisions is going to put a microscope on every aspect of how we die in this country. My hope for the film is that it opens a dialogue on this critical issue by taking a look at the experiences of a few Oregonians. None of that would be possible without the courage of individuals like Dr. Morris, Cody Curtis, her family, and the many others who allowed me into their lives. Though these individuals ultimately had a choice about when they died, a choice most others do not have, I believe there is much to be learned from their stories and the way that they approached the end.