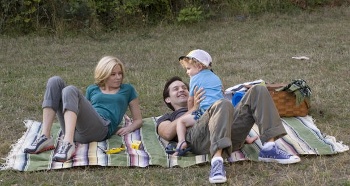 The surprises began during the initial writing process. I started typing the script not knowing where it was going — not at all in fact. I was just following impulses. Characters emerged from the ether that I did not expect, and a plot emerged without forethought — at least not the kind of structured forethought of an outline or the weeks of pondering and planning that I so often engage in before I begin to write scenes. Truthfully, I had no idea that the keys I was hitting would turn into a screenplay I would like, let alone one that other people would like. Later on, the movie continued to be rewritten every day by my talented actors through improvisation and rehearsal, and finally the story was heftily rewritten in a lengthy editorial process. The bottom line is that the structure of the story evolved an incredible amount from my initial first few days of writing until picture lock, so the biggest surprise of all has to be how close in spirit the final movie is to the original impulses I had when I was first writing it.