NYFF Critics Notebook: Manakamana, What Now? Remind Me, Norte, The End Of History 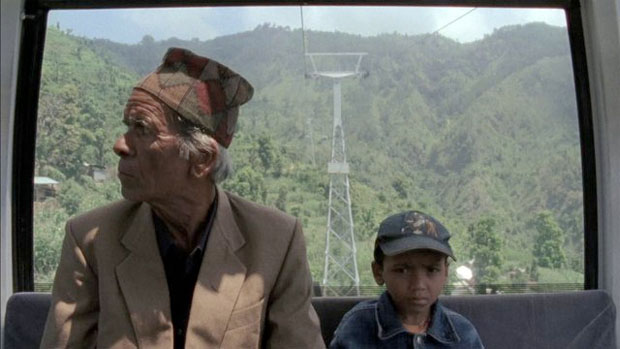 As the last stop on the fall festival circuit affecting awards season hysteria and odds, the New York Film Festival tends to draw most of its coverage for already-in-discussion main slate titles. This year there were a record 36 films in that section, with the expanded number seemingly designed to include more crowdpleasing filler (Richard Curtis’ About Time) and Hollywood titles that can serve as reliable draws (Nebraska, Inside Llewyn Davis). That’s not to say the festival’s 51st installment doesn’t still serve as a festival-of-festivals cross-section of notable recent titles of the hard sell type, but more of them than usual seem to have been shunted to unappetizingly-titled sidebars for the in-the-know to suss out, e.g. Stephanie Spray and Pacho Velez’s Manakanama and Joaquim Pinto’s What Now? I Forget, two prominent titles being shown in the “Motion Portraits” sub-division (“eight vastly different approaches to the form of the cinematic portrait”) of the “Spotlight on Documentary” sidebar. That’s not necessarily a complaint: festival programming’s nothing if not the art of balancing what needs to be shown to bring less adventurous to subsidize tougher fare. Still, it’s a taxonomic curiosity worth noting.

Manakamana starts in total darkness with a literal bang, a mystifying/unnerving jolt soon visually clarified as the sound of a cable car set into motion. In outline, Manakamana’s rules are simple: each shot’s the duration of a cable-car trip up or down the mountain to the titular Nepalese temple, a journey variably about the length of a 16mm reel. The car can go up or down and its passengers can sit facing the direction they’re going or with their back toward it, affecting the camera’s placement opposite. Even before considering the number onboard, that’s four variables that make orientation — knowing what to anticipate in the background, which posts will be passed with a clang at what time, whether a village mid-way through the journey will be visible on the left or right, or at all — a constant battle.

A spatial awareness exercise machine combined with exercises in real-time motion portraiture, Manakamana’s first two laps are wordless. The opening salvo’s wordlessly entrancing, a man and boy sitting in awkward silence punctuated by loud, unnerving jolts as each post is approached and passed, the ground rising and falling behind them in spectacular gradients. The second trip’s drabber, a woman sitting silently with a bouquet, facing the opposite direction from the first passengers; previous training on how to visually anticipate a sonic jolt is instantly wrong-footed, since we can’t see the noise-causing posts as they approach, the first of many disrupted patterns. The third trip introduces dialogue between two people comfortable enough to chat before the unblinking camera’s gaze, while the fourth ups the participant number to three.

Shots are stitched together in the darkness at journey’s beginning/end. Changing sunshine and mist levels point to time’s passage, with a sort of visual cleansing period mid-way as more time is spent in noisy total darkness than usual. Silhouettes give hints about who might be next but can be puckishly misleading: three people give way to what looks like the same number of people in the dark, but the new passengers turn out to be four goats. Complications are introduced in dribs throughout, like shot nine’s sudden, baffling imposition of a square reflective surface on the lower-left, forcing you to rethink where the camera is (presumably mounted outside?). At the end of the last ride, the film in the camera suddenly runs out, leaving us to figure out the ending visuals of the last ride based solely on audio information — which, it turns out, we’ve been trained well enough to do.

The DCP doesn’t capture grain or other obviously celluloid properties very well, but note the prominent sound early on of what sounds suspiciously like a film projector; like admitted dual inspiration James Benning, co-directors Stephanie Spray and Pacho Velez probably have zero qualms about soundtrack sweetening for greater subtext and more power to them for that. Expectations of reliable recurring patterns are set up and knocked down throughout, which is intellectually scintillating if sometimes tough going viscerally. It took me nearly two-thirds of the running time to finally enter the rhythm; results will obviously vary.

There are different durational concerns in Joaquim Pinto’s pointedly rule-free What Now? Remind Me. Pinto’s a very cinephilic figure, his movie cross-indexed catnip for globally-minded viewers; there are stories about Portugese director João César Monteiro and critic Serge Daney and passing moments spent with Rita Gomes, whose work has (I’m pretty sure) never had American exhibition. These reminiscences punctuate a year’s worth of sickbed memories: long stricken with HIV and Hepatitis C and documenting a year’s worth of experimental treatment, Pinto free-associates when he can’t do anything more. “Filming became just one more activity in our daily lives,” he says of the video diary process, and here the cinephile’s gaze isn’t just an empty formalist indulgence but a way to sharpen the desire to live through heightened observation.

Filtered through a fragile mental state, What Now? Remind Me rummages through global history, literary archives and tales of film set camaraderie, exploring intellectual detours and following through on associative triggers. In a medical lab, Pinto tries to understand the nature of viruses and ends up recapping a brief history of how colonialism unleashed white men’s diseases on indigenous populations; spotting the word “nunc” in an illuminated manuscript’s inscription “Nunc scio quid sit amor” (“now I know what love is”), the momentary resemblance to the name of Pinto’s partner Nuno reminds him of the strength of their love. Non-intellectual images straight from the heart — Nuno twitching in his sleep, illuminated only by the light of Pinto’s laptop, an unfakeable view of the Beloved One captured at his most vulnerable — punctuate other chains of intellectual association synthesize the personal and historical, even as sickness threatens to terminate the reverie.

At 164 minutes, What Now? Remind Me is constructed in such a way that it’s impossible for it to “fail” per se and takes over-full advantage of this. Pinto is sick and sometimes forgetful, so he’ll repeat the fact that he’s mislaid his notes twice, underlining his condition by “forgetting” what he’s just said. Any lassitude, redundancy, slackness or underwhelming image can correlate to his enfeebled mental state and must be excused. It’s a film in love with the very idea of being alive, finding value in God’s humblest creatures, with much screen time devoted to closely observed shots of the insect world. All personally commendable, but it’s bad form for a film that’s about discovering with repeated gratitude the ineffable beauty of survival/life/love to rather discernibly assume it’s translated these sentiments straight to grateful viewers.

There are moments so clearly wheel-spinning (Pinto setting his dog’s play toys into primitive stop-motion life) they’re exasperating; duration comes to seem like a cudgel as Pinto runs out of fresh sentiments. A certain kind of cinephile would argue that that kind of stop-motion interlude affirms The Magic Of Cinema at its humblest, the power of the imagination with limited resources to conjure life out of unremarkable objects, and a tribute to the rejuvenating vitality of cinematic imagination; suffice to say I’m not that cinephile. At other times, Pinto lapses into unreconstructed radical grousing about the government or people taking too many anti-depressants rather than good old-fashioned drugs; this is simply preaching to the choir. Still, it’s a remarkably successful/empathetic mind-meld overall.

More potential durational abuses can be argued over re: Lav Diaz’s North, The End Of History. It’s apparently impossible to talk about the Filipino auteur’s films without mentioning that most err on the side of length, an especially notable attribute in a festival context, where choosing Diaz requires giving up at least half a day on faith. I’ve only seen two of Diaz’s other movies (2011’s Century Of Birthing and 2002’s Hesus The Revolutionary), so there’s limits to how helpful I can be. That confessed: if (as colleague David Phelps proposed) Diaz is a sort of exploitation artist whose work seems repeatedly drawn to emotional extremes incited by murder, rape et al., it’s also true his vision of Filipino society as a constant atrocity exhibition has empirical sources.

North’s first part is an undisguised Crime And Punishment restaging, with a nasty usurer (her too-filled-out frame indicating parasitic prosperity) killed by drop-out law student Fabian (Sid Lucero), who’s convinced the only way to restore the country is to ignore morality and eliminate corruption through violence. “The Philippine apocalypse is approaching!,” a military man screamed in Hesus, which is very much the message still. North’s first scene has Fabian haranguing his friends in a coffee shop about “the new politics,” which stop just short of “kill ‘em all.” The world’s slowest zoom or push-in (it’s hard to tell) is barely evident, slowly eliminating others in the shared space, as if moving at the speed of solipsistic thought that will eventually stop and become static motivation for violence. This barely perceptible motion will be repeated several times when Fabian lectures, here ending with a bizarre disruption as a man in the street enter the widescreen frame and stands holding a mirror. It’s unclear what happens between the first and second shots, but there’s an abrupt cut to a woman lying bleeding heavily in the street surrounded by glass shards. Death by mirror (of Fabian’s ideas?) — the abrupt introduction of arbitrary societal cleansing in action — is the first of many violent acts, most irrational and barely motivated.

After putting thought into murderous action, Fabian flees and poor working man Joaquin (Archie Alemania) wrongly ends up in jail for life. In jail, Joaquin can’t handle his unjust confinement. “How can you not get used to it when this is now your world?” a fellow inmate asks, a pointed metaphorical way of underlining how Fabian’s abstract concerns become Joaquin’s everyday dilemma. The narrative moves in dense novelistic chunks, alternating every 20 to 30 minutes between Fabian, Joaquin and the latter’s wife Eliza (Angeli Bayani). There’s a strong/justifiably didactic flavor to watching Fabian and other characters endlessly hassled by born-again Christians (about which Diaz has much to say in interviews), but the late introduction of a character floating Tarkovsky style an unsatisfactory substitute form of secular transcendence.

Those very strange slow push-ins aside, Diaz is also good with more conventional film grammar, pulling back expansively during a nighttime jail sing-along to give the momentary communal reverie some breathing room and choosing his static tableaux carefully. In digital, Diaz favors subtle distributions of white and grey in misty rural nightscapes and understands exactly how little light the camera needs to do its work. There’s a late shot of Fabian brooding before a personal implosion in front of a house, flanked on either side by two white lights, with ground floor windows of red, yellow and purple in between, a casual color spread that’s pleasing on its own modest terms.

Where Century Of Birthing was self-reflexive, with its director protagonist stopping the film dead (in a good, deadpan way) to read an entire editorial outloud about slow cinema as art, Norte is straightforward to a fault about its political urgency and blunt moral convictions. Diaz is a formidable talent, eliciting flawlessly naturalistic performances and exhibiting casual visual panache. At 250 minutes, Norte is extremely watchable, and there’s the rub: it’s reasonable to expect transcendence at that sustained length, but instead we get a relatively straightforward tract on political abuses, Christian dogma and social inequity in Filipino society.