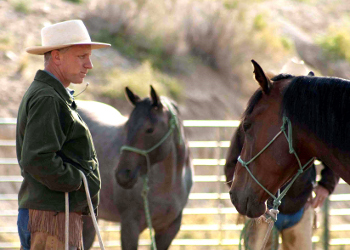 What I have found most surprising about my film Buck is how it appears to affect people in so many different ways. As I started this journey to tell Buck’s story, I thought it would be about changing people’s perceptions about how they treat and train horses, as well as how to deal with life’s difficulties with a bit of cowboy wisdom. However as the film was completed and we started test screening it for a wide cross section of friends and associates, I was pleasantly surprised that we had achieved my original intention, and more. The strong reactions that I received made all of the blood, sweat and tears that it took to make Buck well worth the effort.

I had people who had no interest in horses calling and telling me that they could not stop thinking about Buck. A director of a major theater in NYC said it made her rethink how she worked with, and directed, her actors. Another friend told me that the description of Buck’s violent childhood really resonated with her in an intense and hopeful way, as she herself came from an abusive childhood, and was thankful for the hope that it delivered to victims of such horrific pasts. Another man said that after seeing the film he would say to himself, “How would Buck handle this?” when dealing with his two young children.

Having so many people come to me in tears after the screening has made this whole experience extremely moving and gratifying. Knowing that a subject that I had such a passion for was truly resonating with others too makes me feel like I achieved what I set out to do — to touch people’s lives with a film about hope and inspiration. And certainly, if someone does have a horse, they will leave with a new understanding of how magnificent that creature is and how to live with them in harmony. As Buck says, “Horses and life, it’s all the same to me.”