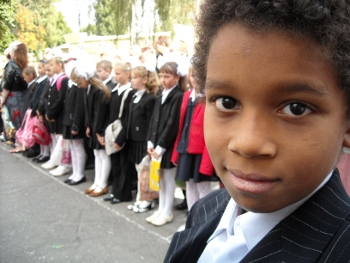 My film is about 17 biracial Ukrainian orphans, mostly teenagers, and the woman who has been their foster mother for years despite all the hardships, be they financial or caused by the racist society that surrounds them. Before going on the first shoot, I had no doubts that Olga, the foster mother, can only be a saint. Unfortunately the biggest surprise was the realization that her need for power and control is really the foundation of the family and the motivation for her to become a legal guardian of so many children. Sure, we all want to believe that we are always right but eventually we realize that the idea of “my way or the highway” doesn’t work. In Olga’s mind it does. I witnessed and filmed how a child’s dream can be methodically crushed, day after day, year after year, until the time for the realization of this dream has passed. I also witnessed as the brightest and most talented child could be tossed away only because he is as stubborn and as strong as Olga.

On the other hand, Olga does so much good for the children by simply being their mother, by giving them a home and a family, by caring about them, by being their protector and by showing them an example of what a family is. As we all know, no Mom is perfect. If it wasn’t for Olga, most of these children would have grown up in orphanages which so often leads to many issues down the road of life.

How did I react to such a surprise?

On a personal level: I evaluated the relationship with my teenage daughter and made some adjustments!

Professionally: The film’s concept has changed from the initial idea I had. I thought I would make a film about the issues related to racism in Eastern Europe. Instead, I ended up making a multilayered complex exploration of a family. The challenge in cutting the film was to show both sides of the story, from Olga’s prospective and from the children’s. I think the balance is there. Who am I to judge the woman who has raised two dozen children?