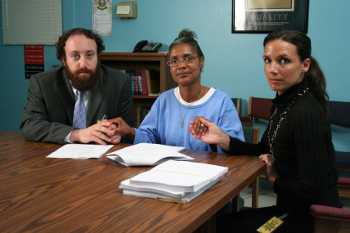 Making Crime After Crime was full of surprises — which in a way is not so surprising because at least on the surface the film is a legal thriller, a genre that is built on suspense, intrigue and discovery. These aspects of the genre were made all the more unpredictable because the film is a vérité documentary: I was tracking the battle to free Deborah Peagler from prison as her case unfolded so no one knew exactly how it would turn out. Sure enough, clues, twists and turns emerged that Debbie, her lawyers and I could not have foreseen. These developments in turn led to the biggest surprise for me as a filmmaker — the film took much longer than expected to make. Rather than spending a year with the case as I had initially planned, I ended up following this story for five and a half years until it finally resolved.

I have also been surprised by how much the journey of making this film has changed my relationship to the issues that the film documents. I approached this film not as an activist, but as a storyteller who felt a deep connection to Deborah Peagler’s saga. Over time, however, it became clear that releasing my footage to news agencies and community organizers could influence the outcome of the case itself. I never expected to become an integral part of the effort to free a survivor of domestic violence from prison, but in the end, the film and the related media campaign went hand in hand with Deborah’s legal strategy.

If the injustices and wrongdoing uncovered in this film had not been so shocking, I don’t think I would have crossed the line between filmmaker and subject in the manner I have just described. But by telling Deborah’s story, I have seen a kind of misconduct in our justice system that should be of concern to every American. I have connected with women in prison and victims of abuse in a way that I never could have imagined, and have become an advocate for the plight of battered women, especially those who have been wrongfully incarcerated. This was a cause that I knew little about when I first focused my camera lens on Deborah Peagler, and I hope that audiences will experience a similar connection, even when they least expect it. We are now establishing a nonprofit fund that will benefit agencies working on cases like Deborah’s and that will help her story have a real impact on domestic violence law around the country — more information about the film and our campaign is at www.CrimeAfterCrime.com.