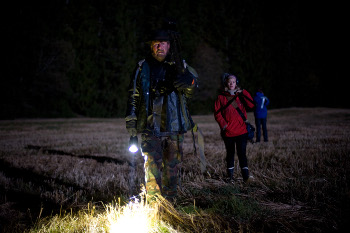 I quit getting surprised at what happens during the making of a film a long time ago. On Troll Hunter, I cast well, so I knew the acting was going to be good. I chose the best d.p., so I knew it was going to look right. I had the right producers, so I knew we were going to make the right priorities. I trust my own and my team’s abilities to do good VFX work, so I knew the trolls were going to be cool. I knew the story was good, because I am confident/naive enough to think that if I like it, the audience will too. Even though the film is filled with very, very Norwegian elements and references, I always thought the film would have an appeal outside of our country.

But I was not even close predicting how intense the reaction would be.

A wild online buzz started at Twitchfilm.com, which led to our fantastic Fantastic Fest sneak preview, which again led to worldwide distribution through Magnolia and Universal, including a U.S. theatrical release. Now the film is premiering at Sundance, I have representation at WME, I am on Variety’s 10 Directors to Watch 2011 list, and I have been to Hollywood to discuss future projects with people I never thought I would meet…. and all this in just over two months. I am surprised at how so many people outside of Norway fell in love with our film and how quickly it has turned my career and life upside down and inside out.