“IF A TREE FALLS: A STORY OF THE EARTH LIBERATION FRONT | director, Marshall Curry

Documentary, If a Tree Falls" A Story of the Liberation Front, Marshall Curry, Sundance Film Festival 2011 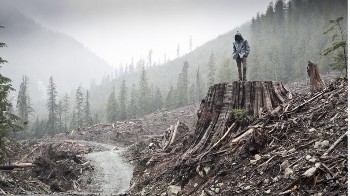 The making of this film has been a series of surprises. The first surprise hit when my wife came home from work and said that four federal agents had come into her office that day and arrested one of her employees. He was accused of burning down two timber facilities in Oregon four years earlier when he was part of the Earth Liberation Front, and if found guilty, he would go to prison for the rest of his life with no chance of parole.

That seemed like a surprising sentence for a crime in which no one was hurt, and Daniel McGowan was definitely a surprising “eco-terrorist.” He’d grown up in Rockaway, Queens, was the son of a New York cop, and had been a business major in college. How did he go from there into the radical environmental group that the FBI calls the “number one domestic terrorist group” in America? Sam Cullman (d.p./co-director) and I dug in, looking at McGowan’s background, and the development of the ELF as a whole. And along the way, we unturned one surprise after another that challenged our expectations: characters who said the opposite of what we predicted, flashes of unanticipated drama, and archival footage that we couldn’t believe.

We’ve tried to build those moments of surprise into the film and give the audience the same experience we had: an unsettling ride that shifts your sympathies and leaves you with a more complex, if less comfortable, view of the world.