“PAGE ONE: A YEAR INSIDE THE NEW YORK TIMES” | co-writer-director, Andrew Rossi 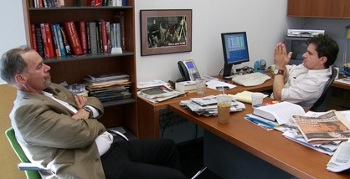 In April, I went to the newsroom at the Times with my camera, ready to film.

This had been my routine for the past few months–I’d show up, not sure what story the reporters on the Media Desk would be covering that day, and attempt to be a fly on the wall. When I arrived, “a former hacker with a whistleblower website” –whom we now know as Julian Assange of WikiLeaks–had posted a [chilling] video of a U.S. military helicopter shooting down two journalists and several Iraqi civilians. Reuters had been trying for two years to obtain the footage through traditional, legal channels, and somehow Assange had managed to get his hands on the video and post it on You Tube. The talk that day at the Media Desk was about how the leak was a modern-day Pentagon Papers. Noone needed to drop off thousands of pages of secret documents on the steps of the New York Times, as Daniel Ellsberg, the leaker of the Pentagon Papers, did. When I interviewed the Times‘ executive editor Bill Keller later that week, he told me: “Daniel Ellsberg needed us. WikiLeaks doesn’t.”

What struck me most that day wasn’t Keller’s candor. I’d been impressed with the newsroom’s openness ever since they’d agreed to let me and my camera in months earlier. What really surprised me was the realization that something fundamental was changing–not just in the news business, but in how we as a culture access and interpret and internalize information. Suddenly, the Times and other institutions like it seemed–to borrow a line from David Carr, one of the writers on the Media Desk–“like trains whose cabooses have square wheels.”

From then on, the film really unfolded within that context–that is, how would The New York Times, an institution that I believed, and still believe, has a vital role to play, adapt in a world that is transforming in such disorienting ways.