These past two weeks I’ve been in Rochester, NY working on the Orphaned soundtrack with all the usual suspects and collaborators.  (Let me know if there are issues with the feed. This is an ongoing daily live feed where I will eventually be distributing free content…it is part of my MFA thesis.) I had been trying to write a response to the latest “explosion” of indie film acquisitions, the new world models of indie film financing, and the influx of nobody filmmakers. BUT I found that others with something to say, have already said it best, so I scrapped it. (Although I am interested in any comments or response to some of these links.)

A few months ago I met a fellow micro-budget director through these articles, and an introduction by a mutual friend. Neal Dhand had just finished work on his film Second Story Man (pictured below) when we first started talking. The film had just been accepted to Cinequest. Neal lives, works, and teaches in Western NY. So while I was in town, I took the opportunity to have dinner with him and talk about what was really on my mind…Indie film sound production and recording. 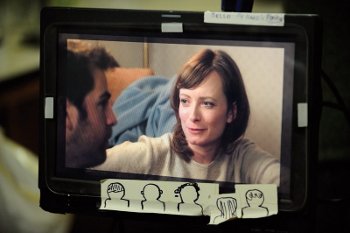 An early conversation with my sound designer, Kevin Kniowski, consisted largely of me making a lot of strange whistling noises. I’m sure I also waved my hands around for emphasis and hit  his radiator more than once. We were nearing picture lock on Second Story Man and gearing up for a full on sound design assault; I was trying to describe what old, rattling pipes sound like. Working with sound, particularly in post, is a much different experience for me than say, working with my cinematographer  in the early stages of pre production. With the latter, I brought a lot of DVDs and artwork, and we talked about them. With Kevin, I could really only find two usable references, and strangely enough, they were both from horror films. So the communication barrier (“What the hell is the sound hermeneutic?” and “It should sound like this. [Insert whistling]. So…more low end? I don’t know.” ) certainly presented an obstacle. But what about those other little things that we come up against as low-to-no budget filmmakers when the saying “the sound needs work” is euphemistic? Second Story Man is a wintry film, shot all in Rochester, NY in January. Cold exteriors equaled nightmarish sound. We were able to travel to NYC for one ADR session early in the process, but budgets, time conflicts, and any number of other factors, made that a non-option when additional ADR reared its ugly head. Our first session was an experience. We, like so many others before us, finally found uses for long stored away blankets, and an assortment of recyclables-turned-sound-baffles. Then, arrive in Brooklyn Friday night and go to sleep. Next, build sound booth/fort at 6am. (Bad call of the day = breakfast burritos.) The three actors run through 12+ hours of ADR. Finally, back in the car by midnight and on the way to Rochester. Easy, right? Well, a few overlooked lines, and unsatisfactory sync later, we’re looking into ADR round two. Turned out pockets mean no trip to NYC. 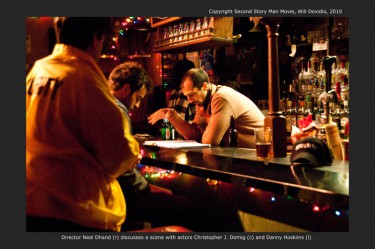 No trip to NYC means two options:
1) ADR without the director.
2) ADR via Skype.

So now I’m in a coffee shop at about 7pm on a Tuesday night in Rochester, while Kevin, in Brooklyn, patches me in so that I can direct Lindsay Goranson. We develop a really rudimentary series of hand signals for me to let them know to un-mute me so that I can give some direction. This later devolves into me waving maniacally and accidentally ordering multiple cups of coffee. Problems arise; I can’t always hear the lines. I can’t differentiate between the original production audio and the new line unless they are severely out of sync – which we are obviously trying to avoid. The computer fan keeps kicking on, and  the coffee shop has a band playing there that night. So I pack up my things and run to my producer’s house to finish Lindsay’s session, and begin Chris Domig’s. During my frantic dash from the coffee shop to Rick’s house, Kevin and Lindsay run about six of her lines and despite video lag, lines cutting in and out in my headphones, and the overall goofiness of the scenario, we eventually wrap on ADR.

This ordeal raises many questions. Is there an expectation of micro-budget films to have subpar sound? I feel like there is. After a screening at a small film festival a few years back I distinctly remember this exchange from two audience members:

“Sound was all over the place.”
“Yeah, well it’s probably all they had to work with.”

This might be true in some instances, and I’ll be the first to say that there are limitations of what can be done, but it’s a mistake to think of this as the norm for films falling under $X. Is technology being over (or under) used? Is directing from a coffee shop over Skype still directing? Is this a lazy approach, or an ‘any means necessary’ attitude? How often have we all heard the valid complaint that it seems HDSLR’s  are making everyone a cinematographer? Is there any equivalent coming within the sound community? Our low budget approach forced Kevin and I to be extremely creative. At times our creativity was to hide poor production audio. Not an ideal situation, but one that really led to rewarding results. It’s not beyond the imagination to foresee software and technology that makes the need for clean production audio a thing of the past, for example. (a good thing, in my opinion) On the same note, it’s not unimaginable to foresee a time when everyone is a sound designer, complete with sound templates for scenes of every variety. -Neal Dhand

Sound is one of the single most important things in a film, indie or not, and most of us at the low/no budget level do a terrible job with it. (I am totally guilty of this and extremely frustrated with sound. I’m doing my best.) Sometimes it’s a matter of taking the time to do a proper mix, sometimes you just didn’t have the time, or crew, or gear on set to get good sound. But like Neal, we should be using all means necessary, and cheap as possible, to get the best sound we can; Put your thinking caps on.

Another mistake often made by low budget/indie films is using popular music for things that would be great as an original score. Popular music comes with baggage. An audience has already had experiences and moments with some of these songs, and they bring that to your film when you have it playing in the background during a scene. Baggage that you may not want attached to the emotion or idea you’re trying t get across. BEWARE of pop music in your films…you don’t need the emotional bullying and rights bill that come with it. Take risks with your sound, but always remember…it’s never to be overlooked.

Let us know of any creative tricks, tips, or gear you’ve used to solve your sound problems.
Cheers
John