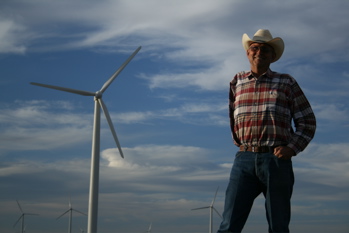 by Brandon Harris
in Director Interviews
on Feb 9, 2011 Hope is easy to sell, but fear is easier. Billing itself as a “climate change solutions” movie, Peter Byck’s Carbon Nation doesn’t want you to panic. If fear of the consequences of climate change has been the primary emotional content associated with the slew of climate-themed docs that have found their way to screens in the wake of An Inconvenient Truth, Carbon Nation dwells more on the possibilities that technological innovation, communitarian initiative and an end to political gridlock could have on our world. Time is short, but in Byck’s telling, the means to stymie the long-term catastrophes associated with our consumption of carbon-based energy are here and it’s only a matter of time before we put them into widespread use. Byck’s doc travels all across the United States, spotlighting individuals at the forefront of green energy technology, activists who are working to find ways of convincing and educating the public, titans of media and industry who are hip to the cause and reporters who chronicle Washington’s immobility on the subject.

From windfarms in Roscoe, TX to water-powered geothermal generators in Alaska, Byck finds Americans who, with little fanfare or notoriety, are working toward a sustainable future for us all. Byck, whose unparalleled cast of green thinkers, intelligence officials, media tycoons and activist luminaries for Carbon Nation includes Van Jones, Thomas Friedman and Richard Branson, succinctly articulates the reasons progress on these issues is so vital without pointing fingers or raising ruckus. The veteran documentarian, who made the SXSW Jury Prize-winning doc Garbage and has made short docs on the making of Peter Jackson’s Lord of the Rings films, finds ways to make these arguments while including the perspectives of individuals one wouldn’t associate with the green energy movement, including former CIA director R. James Woolsey or Duke Energy CEO James Rogers. We caught up with Byck on the eve of his film’s release. Carbon Nation opens in New York this Friday.

Filmmaker: Do you believe that we’ll ever be able to replace fossil fuels as our primary source of energy?

Byck: Carbon-based energy has been a great idea. It’s been very effective, and we’ve created a dynamic and interesting culture using it, from the steam engine and the factories in England on to today. There’s got to be a better way of doing it and I don’t think we’ve even scratched the surface of attempting to do without carbon-based energy. There’s not one turbine that’s efficient enough, there’s not one solar panel that’s efficient enough, there’s not one algae-based fuel that’s cheap enough but I think ten years from now we’ll be amazed at where we’ve gone. There are too many people who are invested in the change right now. Let’s just talk about money. The energy industry is a six trillion dollar industry! I don’t think the oil companies or the coal companies or the gas companies are committed to burning carbon-based fuel, I think they’re committed to making money. As soon as the low carbon and no carbon energy sources become cheaper than the carbon energy sources, then you’re going to see a whole new world.

I think gasoline is going to be incredibly expensive very shortly. It was $140/barrel in ’08 I believe. The only reason it dipped back down was because we had a recession. Right now its up to $80/barrel. When I started this film three-and-a-half years ago, people never thought it would be above $40 or $50/barrel. That was just three-and-a-half years ago. Now it’s $80 and no one’s blinking. So, oil is going to get more expensive and whether oil is running out or not is a big question. There’s a big argument [now] about peak oil. What if we’ve run out of oil?

Filmmaker: The first film I ever covered in this column, Chris Smith’s Collapse, addresses that issue.

Byck: Well, what if we have? What if we are coming down the peak? Then it makes a helluva lot of sense to figure out the alternatives quickly so that we can keep going down the road that we like. I like driving a car, I like taking a hot shower, I like when I open the fridge and a beverage is cold. I just want to do it without ruining the planet.

Filmmaker: One of the arguments the peak oil activists always throw around is that beyond its use for energy, oil is used to create plastics and any number of other products that we use and consume every day which, regardless of how much energy one is deriving from green sources, we’ll never really be able to replace.

Byck: Well we’ve got to keep making those plastics with petroleum-based products as we figure things out. There’s a story we unfortunately cut from the film but it’s going to be on the DVD, where a group is using carbon dioxide as a feed stock for plastics. So they’re using what is the great bogeyman out there for those who are worried about too much carbon in the air as a feed stock to make plastics out of. Right now its sort of a half-and-half blend of carbon dioxide and petroleum to make the plastics perform like they want. It’s in a very early stage and it just small labs doing the tests, but I absolutely know who can get rid of petroleum products as a means to make plastic in the next… well I’m not even going to guess, but that’s probably the thing that will be the very last use of petroleum from the people I’ve talked to. Let’s get off of petroleum from energy.

I think what’s going to happen with algae is probably going to be earth shaking. I would stay tuned because there are too many smart people working on it right now, too many dollars. When Silicon Valley aims at something, they get there. There’s a lot of Silicon Valley dollars going toward algae as a fuel generator. Basically any fuel we use is old algae, so they’re just trying to speed up the process.

Filmmaker: You touch on the political situation very lightly in the film; was that something that was dealt with in more detail at a certain stage in the editing but was ultimately a victim of paring the film down? It seems like that’s as big a part of this story as the innovation, no?

Byck: If the U.S. Government, the Congress, the President all got together and decided, you know what, let’s even the playing field or even give low carbon and no carbon energy a leg up — let’s quit giving carbon-based energy a leg up through subsidies — than I think you’d find a lot more movement a lot quicker. If you decided to put a price on carbon, I think you’d find a whole lot of movement a whole lot quicker. That being said, that’s not the only way to skin this cat. Everyone’s trying to figure it out.

I’ll tell you what, we thought we finished the film last March. We premiered at the environmental film festival in our nation’s capital. As I was going to conferences, starting with the Wall Street Journal’s ECO-nomics conference last March while the film was being finished, I started learning about companies that had been taking this on, curtailing their own carbon use and saving a lot of money. So we shot this last November and added a chapter to the film with Gary Hirshberg from Stonyfield Farms. Companies are making money by lowering their carbon output because burning a lot of carbons means you have a lot of waste. Who can support waste? No one wants to fight for, “let’s keep being wasteful!” When companies talk about their bottom line and their stakeholders and shareholders, well guess what, there’s no shareholder who wants to find out you’ve been heating your building for $1,000/month when you could have done it for $500/month. That’s a huge motivator. Look at a company like Stonyfield Farms, which during the recession found enough money to hire 47 people. Gary Hirschberg said in his industry he was the only person hiring people during this last recession. Look at Dow. They spent $1 billion on energy efficiency since 1994 and they’ve saved $10 billion because of it. Yet they’re the ones saying you can’t increase the price on carbon, you can’t do cap and trade and make carbon cost money.

With regards to the politics, one of the first interviews we had was with Ray Anderson. Ray’s point was, don’t wait for Congress. When the people lead, the leaders will follow. What I’ve found in my research is, if the CEO of a company gets it, things change. That’s where it needs to happen — it needs to be a “top down” leadership approach. Would I like Congress to act faster? You bet. Do I think that’s the only way to skin this cat? No, I don’t.

Filmmaker: Why do you think there has been such a strong backlash against the climate change movement here in the United States? As the evidence that climate change is taking place continues to mount, it seems that the opposition to those ideas has only grown stronger.

Byck: I think the carbon-based energy companies and the people who support and enable them are better storytellers than the people who are trying to raise awareness about climate change. I think it’s a storytelling issue. Until the people who are pushing for a low-carbon economy, for a myriad of reasons — whether it’s national security, energy security, health, climate, being a steward of the Earth, whatever those reasons are — [become] as good as the storytellers coming out of the oil industry, coal industry and natural gas industry [nothing will happen]. People listen to good stories. There’s a lot of room for improvement on that storytelling. I think it starts from the top down. It starts with every CEO who gets it. I think it starts from the President. I do believe Obama absolutely gets the issue. I do not think he’s been the best storyteller or presenter of this issue. When people learn the truth, they get it. The issue is getting the truth out there, in front of enough people in a very practical way. That’s why I spent the last four years of my life making this film. I didn’t know there was such a vacuum of storytelling out there, but that’s what I’ve learned.

I took an airline flight, sat down next to a guy, he’s a UPS pilot, he overheard me on the phone, asked me what I did. I told him I was a filmmaker making a movie about climate change. He looked at me and said, “You and I are going to disagree about everything.” He was absolutely convinced that he and I were going to be on opposite sides of, well, everything. I was intrigued, I was challenged. I never speak to people on a plane. We spoke the whole way from Louisville to Denver, from before take off until after landing and into the terminal. We’re now friends. He’s now become the most energy-efficient pilot UPS has. We keep in touch. He saw my movie. He gets it. I spoke to him in a way where I didn’t tell him he was doing anything wrong. A lot of people bristle at being told they’ve done something wrong. When he and I talk about the country and politics and stuff like that, we’re on agreement on about 90% of the issues. He was absolutely convinced we wouldn’t agree on anything because of what he was being told. I just honestly believe that a lot of really good people in this country are being lied to and I think that’s its really just a business decision to sell more soap.