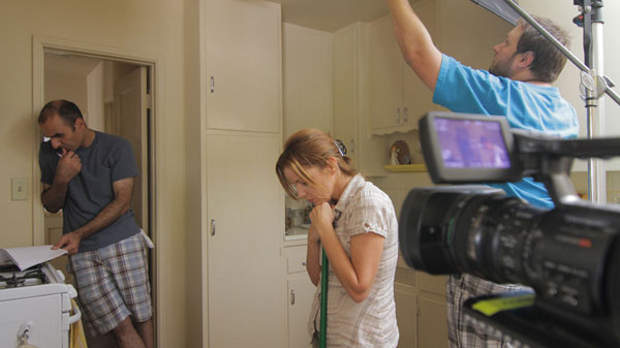 It seems that this column is really starting to draw out a conversation from us micro-budget folks, and beyond; I couldn’t be happier. There seems to be a lot of dialogue happening in the comments, and I’m getting constant feedback from filmmakers from all over the world who are trying to make a new DIY model work. Every once and a while I get requests from some folks who want to contribute to the column itself. Many times these requests come from publicists, or folks just looking to sell themselves, but every once and a while a real dialogue is jump started, and a new friend made. Christopher Boghosian is one of those folks. Chris is a filmmaker who works and lives in L.A., and our first conversations were about the no-budget scene in one of the biggest film cities in the world. Chris is currently working on his first feature Girlfriend 19(pictured below), and was eager to share his thoughts on micro-budget budgets.

Why do filmmakers continue to get lost in the budget abyss?  Why do they talk about thousands, even millions of dollars as though it were nothing? Like a massive bear trap, unrealistic budgets continue to seize and maim far too many filmmakers.

I too was trapped. After leaving law school to make films, I spun my wheels conceiving of and writing scripts that demanded way too much.  Frustrated and ashamed, my break-through came when I stopped thinking “outside” the box and embraced it instead! If excellence is doing the best with what one has, then I needed to accept my limitations, especially finances. I call it “thinking outside the box, inside the box.” This paradox is the single biggest reason I made three short films in two years and I am now in post-production on a feature.

The value of art lies in execution, not materials, thus, a small budget does not necessarily mean a bad film. The elements that make a film great have little to do with budget, e.g., narrative craft, camera placement, and acting. I know what you’re thinking: to place the camera a certain way, or hire a talented actor costs money — it has everything to do with budget. Sorry, I disagree. Micro-budget filmmaking is all about embracing limitation and making the most of it. Don’t have a crane or dolly? Look at the way Yasujiro Ozu utilized a static camera in virtually all his films. All you have is Uncle Bob as your lead? Look at the way John Cassavetes used non-actors. The greatest common factor of all successful micro-budget films is their potent use of available resources. Give David Lynch a cheap camera and a tiny house, and he is sure to come up with something amazing.

It’s not just about limitations either; there are inherent advantages with micro-budget filmmaking. To begin with, there most likely are no investors. This not only affords one creative liberties, it eliminates a whole slew of legal and logistical issues as well. Second, working on very little often means giving less experienced folks a “break.” It’s a win-win situation. You bless them with an opportunity, and they work much harder than someone who is simply doing their job. Another advantage of micro-budget filmmaking is the Cinderella factor.  Because folks expect less from a small-budget film, they’ll champion it a lot more if they like it.

Permit me to be blunt, but I believe many folks stuck in the budget trap are privately avoiding the hard work of creating. It’s easy to dive into the logistics of raising money, securing this and that, but it’s incredibly difficult to create. I believe folks busy themselves with logistics and use them as an excuse not to be creating. It gives them a credible answer to “What’s going on with your movie?” It’s much easier to build an impenetrable wall than head off on a creative journey into the unknown.

Filmmakers make films and a budget should never be a trap. If it is, then you’re sabotaging yourself by seeking too much. Micro-budget filmmaking is the art of embracing available resources and doing the very best with them. If you don’t have much, make much with what you have! — Christopher Boghosian

Chris brings up a great point: don’t use budget as a limitation, or excuse. There is a filmmaker in my area who has been “making” a film for 10 years now…if only he can get that million dollars. Enough already. Grab the camera and get to work. I recently watched the White Stripes documentary, Under Great White Northern Lights. There is a moment in an interview that Jack White describes his creative process and on-stage process. He puts things just a little further out of reach than he should. It takes him that much more effort to create what he needs to. That’s how you challenge yourself to be better every single time out.

On the other edge of this conversation; I’m fed up with micro-budget being a dirty word. Since my first feature in 2007 I’ve been surrounded with an amazing group of no-budget filmmakers and friends who all have their own projects constantly in motion. Yet when you ask them to talk about their budgets they look around like they were about to tell an off color joke. It’s time to stop being embarrassed and yell it from the rafters. It’s time to use the limitations of budget to blow the socks of those who feel a budget is a reflection of creativity. Recently, Edward Burns has made it a point to disclose his numbers proudly and others are sure to be on their way…I’ll be one of them… will you?

Fun Fact: It cost more to make one suit for the new Tron film than all of my short films and features combined…with a little change left over.;-)