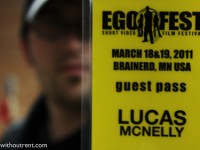 Today launches a new monthly column by director and traveler Lucas McNelly, who will be introducing us to the films and filmmakers he meets through his “A Year Without Rent” project. Ardent readers of the Filmmaker Magazine blog (which should be everyone), might remember that earlier this year, my Kickstarter campaign “A Year Without Rent” made a little bit of noise by raising over $7000, or roughly 60% of the target, in the final day without the help of any rich uncles. Rather, we did it the new-fashioned way — $20 at a time, fueled almost entirely by social media.

In case you’re wondering, I don’t recommend doing it like that. It’s pretty stressful. Blow past your goal in the first week. You’ll end up with fewer grey hairs that way.

As the title indicates, the project will last a year, during which I’ll travel around the country volunteering on indie film projects like the one you’re working on right now, lending an extra hand where needed and documenting a bunch of behind-the-scenes photos and videos. The idea is to introduce talented filmmakers around the country to a wider audience. [This is the part where I tell you that if you want to have your project included, you should click here. You’ll find a calendar and instructions on how to contact us.]The project launched on February 18th. So what have I been doing in the first month? Turns out quite a bit. We started in midcoast Maine, where I loaned my entire DVD collection to my very excited brother. Other than that (and some larger film gear that fellow filmmakers are borrowing), everything I own is in my white 1999 Buick Century. In the first month, I’ve worked on 5 projects, stretching from Maine to Minnesota, from a remote island reachable only by ferry to the middle of New York City. I’ve gotten drunk on the set of FARGO and filmed a motorcycle racing through the hallways of BLACK SWAN.A big part of the project thus far has been getting into a rhythm in producing the content. I’m taking anywhere from 5 to 500 photos a day, with the goal of publishing at least 1 photo and 1 video each and every day. Some days I do a lot better than that. It’s easy when I’m at something like Ego Fest and I’m in the same room with 15 other filmmakers. Or when I’m on the set of Mattson Tomlin’s DREAM LOVER and we’re filming a monster sex scene. Some days are harder. Today, for example, I’m in a coffee shop in Madison, Wisconsin, catching up. It’s raining out. There’s not a whole lot happening. But I’m finding that more so than I anticipated, the days off are vital. Most of the time, when you wrap a project, you kind of collapse for a couple of days and clear your head. I have to make sure I schedule that time in, otherwise I’ll burn out some time in August. But so far, the most rewarding part of the experience has been seeing first-hand just how amazing the film community can be when given the opportunity. I feel like I’m very much being taken care of and everyone has been really excited to have the help. Because, really, have you ever been on a low-budget film set that couldn’t use an extra set of hands to do basic stuff like carry c-stands and hold that extra bounce board the DP just decided was absolutely essential? Of course not, and that’s what I spend a lot of my day doing. Well, that and driving. I spend a lot of time driving.What’s perhaps most fascinating to me is the realization of just how different a film set is when you’re not in charge. I’ve directed two features and a bunch of shorts. It’d been a long time since I’d been on a set where I wasn’t the director or the producer or some other person with a lot of responsibility. The pressure to “make the day” no longer falls on me. It’s liberating. You can really take a step back and see the production for what it is. It’s an amazing way to get a perspective that I think is easy to lose in the rush to get every shot before the sun goes down. I have a lot of conversations with grips about equipment, which is fascinating, because there’s this tendency to not make a director worry about that stuff. I joke with people that the big reason I’m doing this is so they’ll let me play with the gear again. One of my more widely-read blog posts was this day-in-the-life entry about my third day on Andrew Brotzman’s feature Nor’easter, a day where I didn’t see the camera until there was maybe an hour left in the shoot. Afterward, I was talking to Andrew about it. I’ll paraphrase, but mostly the discussion revolved around just that: as a director, this is the sort of perspective you just don’t get. Not only is it interesting, but it’s essential to keep in mind. After all, we aren’t just making movies here. We’re working with people. We’re supposed to be building a community.

Depending on schedules, we’ve got 4-6 projects and/or events lined up for the second month, but we can always use more, even if it’s just for a couple of hours. If we’re in your town, get ahold of us. We’d love to help. Or, just find the guy in a beat-up Red Sox hat taking pictures and say hi. Filmmaker Lucas McNelly is spending a year on the road, volunteering on indie film projects around the country, documenting the process and the exploring the idea of a mobile creative professional. You can see more from A Year Without Rent at the webpage. Follow him on Twitter: @lmcnelly.