by Scott Macaulay
in Filmmaking, SXSW, SXSW Features
on Jun 18, 2011 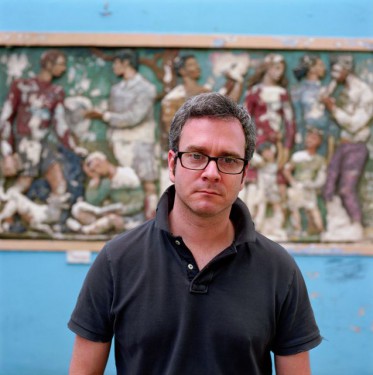 Filmmaker Tim Sutton (pictured) attended the IFP Narrative Lab with his feature Pavilion. Here is his short report about the week.

FROM THE VACUUM TO THE ABYSS
(Or how I stopped worrying and learned to love the IFP narrative lab)So I’ve spent years in “development hell.” Not the development hell you may be picturing — the round, padded, gymnasium-sized room where young filmmakers with dreams go to take their medication, age in fast motion, and walk zombie-style around the place, bumping into stacks of scripts while, behind a one-way mirror, Hollywood executive types in sharp lab coats laugh wickedly. (Oh, that’s not what you were picturing?) What I mean is that I’ve been thinking about, dreaming about, or actually trying to make a film for a long time — and always in a vacuum. And the vacuum is a tough place. Yes, I was lucky enough to have a crew that cares. Yes, a wife who cares deeply (and yet wondered when it might end). But said vacuum was an echo chamber — me, a filmmaker, talking to himself. A person who had lost and regained faith countless times…yet…finally…putting it together in a way that seemed to be breaking through SOMETHING. My film, Pavilion, an ethereal drama about youth and our times, seemed to have carved a route out of the vacuum. Through the Narrative Lab, IFP was investing its brains and heart in my film. I was no longer alone. I had found community and guidance all at once. It was a miracle. And then came all the information. All. The. Damn. Information. All of it rained down — no, no, PELTED down with such intensity that all of the first-time filmmakers in the screening room almost literally had to duck. Deliverables. Festival Strategy. Distribution Strategy. Additional Fundraising. I could go on (but writing out those four literally exhausted me) The film is almost there but the process of delivering the film is just starting.

It’s almost enough to make me MISS the vacuum. Well, not that bad. — Tim Sutton

Tim Sutton is a filmmaker and founder of Video Kid, a film school for five to ten year olds in Brooklyn N.Y.