Lady Vengeance: The Man Who Fell to Earth 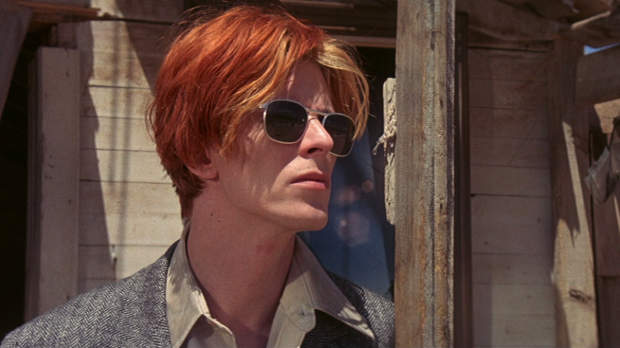 It was only a matter of time before this trippy sci-fi film featuring a disarmingly strange but impossibly stylish early-1970s David Bowie as an alien navigating Earth would make the rounds once again. Nicolas Roeg’s The Man Who Fell to Earth, a cult classic whose Criterion Collection DVD has been out of print for years, has just finished a near-entirely sold-out run at New York City’s Film Forum on a beautiful new 35mm print and will be touring the rest of the country in the coming months. While the film seems dated at times, downright incoherent at others, its reflection on humanity’s desires, flaws, obsessions and perversions is still deeply and depressingly poignant.

Based on a 1963 Walter Tevis novel by the same name, The Man Who Fell to Earth follows an alien creature named Thomas Jerome Newton (Bowie) who lands here and assumes a convincing, if striking, human form. He quickly adapts to the ways of society and, with the help of a patent lawyer (Buck Henry), uses technology from his home planet to develop the technology-driven World Enterprises Corporation. Secretive and mysterious, it isn’t until later in the film that we learn Newton’s goal is to develop his own space program so he can bring water back to his planet, which is plagued by drought. However, with a little help from his few friends — the intellectually and sexually hungry fuel technician Nathan Bryce (Rip Torn), and the sweet but hard drinking Mary-Lou (Candy Clark) who initiates him into the ways of humanoid sex — Newton gradually falls prey to weaknesses like alcohol, television and human emotion. Betrayed by earth and yet indelibly changed by it, Newton becomes a stranger to his own planet yet never quite human. 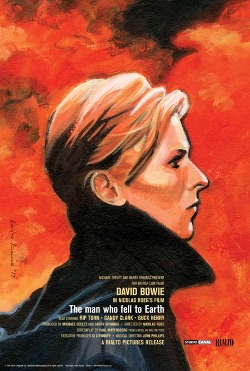 The concept of The Man Who Fell to Earth is really nothing new – an alien arrives on earth, his foreignness throws our ways into sharp relief, and in turn we make him more like us. But Roeg’s filmmaking is so special and strange, so dizzyingly, bewilderingly unencumbered, that the experience is unique and consuming. Roeg fearlessly cuts together totally disparate scenes, such as Newton watching a Japanese sword fight with Bryce bedding a string of young college girls with daddy issues. He provides glimpses of Newton’s home planet that are so completely free of context they could be flashbacks, hallucinations, reality, dream, parallel universe, or any other kind of existence you can imagine, and applies an equally loose hand with the passage of time, which is always disorientingly vague in a way that must reflect the protagonist’s subjectivity. He references and moves between an array of genres with ease – science fiction, futuristic western, literally star-crossed romance, melodrama, mystery, film noir – and the list goes on.

The Man Who Fell to Earth can easily be read as an indictment of modern American culture, with all of its vice, greed, and corporate fetishism, or as an environmental manifesto, or a very direct interpretation of what it means to be an alien in the earthly, legal sense, unable to fully integrate into a new nation and longing to return to a home one is too changed to be part of either. The film can also simultaneously be experienced for its more expansive themes as a treatise on loneliness, futility, and the lawless cruelty that governs the universe. Apparently Tevis’s novel is much more political in nature, tying the events of the story to specific American elections throughout the 1970s and 80s, but the film focuses on more philosophical aspects by allowing time, history, and even reality to shift and never settle into fixed positions.

In addition to Roeg’s delightfully off-kilter storytelling, Bowie, obviously perfectly cast given his Ziggy Stardust persona, makes the movie, and serves as a reminder of how an actor can elevate a film with sheer charisma and physical presence. His shock of bright orange hair, the planes of his sharply etched face, his combined expression of bemusement and pain, have made the film’s posters iconic (the current re-release poster appropriates the cover of his classic Low, and earlier incarnations were riffed on by The Social Network). In the film’s early sections, every gesture subtly conveys a kind of unfamiliarity with his human body. Gaunt, gangly, and unsure, Bowie’s demeanor perfectly embodies the tension between beauty and revulsion which Roeg explores elsewhere in the film; the stunningly beautiful New Mexico landscape is pitted against the corruption and capitalist evil that takes place there; and a young, softly lit Newton and Mary-Lou discovering making love for the first time is mixed with a later scene in which an embittered Newton and gone-to-seed Mary-Lou have grotesquely decadent hate-sex while shooting off a gun loaded with blanks.

I was unexpectedly reminded of Woody Allen’s Crimes and Misdemeanors, which I recently watched for the first time. Both Roeg and Allen employ unusual intercutting, non-sequitur dialogue, playful visual interludes, and an elastic sense of time, and both use archival images to advance and reflect on the plot or the emotions of the protagonist. In Roeg’s case these are mainly images from television and for Allen it is old black-and-white movies, but both Newton and Allen’s Cliff Stern are addicted to visual media as a way of understanding and escaping the real world. Both films are essentially cynical views of humanity from once-hopeful outsiders. Technical strategies aside, the idea that Newton’s journey is in any way comparable to that of a neurotic Woody Allen, who loses the love of his life to a man who represents everything he hates, or a weak Martin Landau struggling to overcome the ethical burden of having his mistress killed, brings home the fact that with all of Roeg’s wonderfully weird stylistic elements, he has still managed to craft a portrait of an alien so touchingly human that it works as an allegory for any lonely man.

See screening dates for Man Who Fell to Earth at Rialto Pictures.