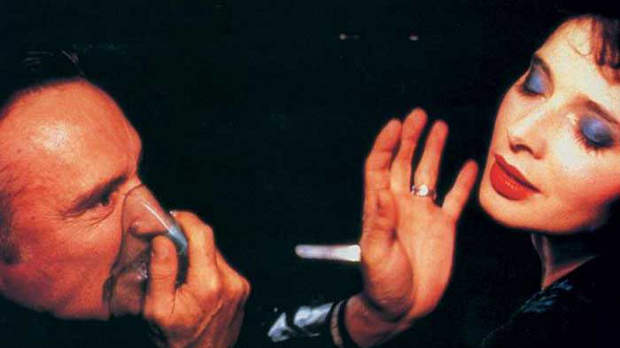 by Scott Macaulay
in Columns, Filmmaking
on Aug 7, 2011

Last year, after becoming a fan of Nicholas Rombes’s “10/40/70” series at The Rumpus, I did a short interview with him for the blog. I asked about his approach to film criticism, which involves extrapolating larger meanings from a film’s isolated moments. (His “10/40/70” series critiqued films by looking at the scenes occurring at those precise minute marks). His reply:

When I first started teaching film in the early 1990s, we’d screen them on via VHS tapes playing on VCRs hooked up to TV sets. Pausing a film for an extended period of time to look at the composition of a frame wasn’t practical. It was only with the advent of the DVD it and large-screen projection that it became feasible, in my film classes, to pause a film with clarity and really explore the meaning of the image. This—and an essay by Roland Barthes called “The Third Meaning: Research Notes on Some Eisenstein Stills”—really transformed the way I thought about film. It was an obvious realization, but one I hadn’t thought about too much: that films are composed of discreet images, and these images have a photographic power of their own.

The idea that constraint can produce creativity—this is wonderful and liberating, especially as harnessed by the Dogme 95 filmmakers and in films like Alexander Sokurov’s Russian Ark. I wondered how this might manifest itself in writing about film. This is the heart and soul of 10/40/70. Rather than pursue a pre-determined idea throughout a film, what if the film itself dictated its own terms? I was searching for a mode of writing about film that could be as experimental and unexpected as film itself. Liberation from the tyranny of writing about film with a pre-determined idea in mind. This is what I am after.

In the last year, Rombes has joined the team of writers at Filmmaker, first with his “Into the Splice” series, then with his Paranormal Activity 2/Fixed Camera Manifesto, and finally with this article on Tao Lin and Megan Boyle. Now, Rombes is about to launch his most ambitious — or perhaps just longest — critical work yet. “The Blue Velvet Project” debuts tomorrow, and it will feature three posts a week (Monday, Wednesday, Friday) looking at that single film in 47-second increments. Here, Rombes explains:

Blue Velvet: One of the most avant-garde mainstream films of the past quarter century, or one of the most radically conservative? A sincere portrait of small-town-Americana love and mystery, or an ironically tinged abstraction of a worn-out genre? An affirmation of the Reagan era, or a postmodern X-ray revealing the decay beneath the façade? Over the period of one full year—three days per week—The Blue Velvet Project will seize a frame every 47 seconds to explore, ending at around second 7,200 in August 2012. The goal is to move through this seminal film in the equivalent of digital slow motion, using the technologies of our hyper-speed era against themselves to rediscover the photographic beauty, lost meanings, and ideological fault lines in the frames of Blue Velvet.

Read the first post in The Blue Velvet Project here.