WHEN EVERYONE’S AN ARTIST 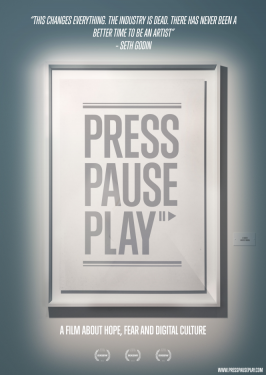 This past June I had the pleasure of sharing the stage with Fritz Kiersch (Director of Children of the Corn) at the deadCENTER Film Festival in Oklahoma City following a screening of the film PressPausePlay. Our task was to discuss the questions posed in the film which is explores the digital revolution of the last decade and its influence on the creative culture.

The film puts forth the notion, as described on the PressPausePlay site, that this “digital revolution has unleashed creativity and talent of people in an unprecedented way, in turn unleashing unlimited creative opportunities,” and ponders these fundamental questions, “does democratized culture mean better art, film, music and literature or is true talent instead flooded and drowned in the vast digital ocean of mass culture? Is it cultural democracy or mediocrity?”

While the mediocrity of it all is fairly obvious any time you open up a browser, these questions and their underlying realities become important preoccupations for those attempting to make a go at a sustainable career as a creative, of any discipline.

During our hour-long discussion we touched on a wide range of topics surrounding these core issues including the increasing importance of teaching media literacy in our schools, the effect technology has had on film education, the role of public media, how new technology is influencing the way in which we tell our stories, and finally the potential for career sustainability in a very crowded marketplace.

deadCENTER captured the discussion in full. If you have 54 minutes to kill, I would urge you to check it out. I truly enjoyed hearing Fritz’s observations and imagine you will too. Additionally, I was incredibly impressed with the community that is being built in and around Oklahoma City, its universities, arts community and the deadCENTER Film Festival itself. If it isn’t on your yearly festival calendar already, it should be.