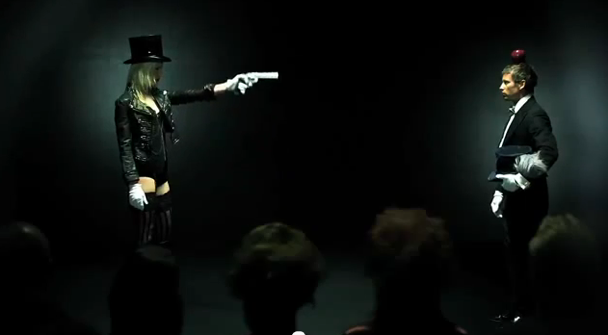 Shia LaBeouf’s directing credit makes this video for Marilyn Manson’s new “Born Villain” something of a curiosity. I will give him a nod, though. Many videos from established rock stars trafficking in violence and theatricalized SM imagery gloss it up too much. But there’s something genuinely sleazy about this one, even with all the obvious references (Jodorowsky, Gilles Berquet, David Cronenberg, Cinema of Transgression). Says LaBeouf to MTV, “The song has all these references to ‘Macbeth’ and all this Shakespeare and heavy theology, so we tried to make Manson’s ‘Un Chien Andalou’ macabre ‘Macbeth’ — that’s sort of what that became.” (Hat tip: Bloody Disgusting.)

According to Stereogum, LaBeouf and Manson met at a Kills concert. The two, along with photographer Karolyn Pho, have also put together a limited edition photo book of the video.

This video is adults only and NSFW.