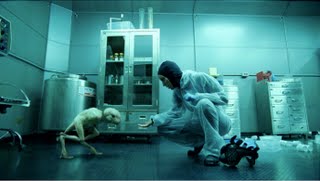 With any independent film there is a point where limited budget requires hacking off a limb or two to get to the finish line. But in the case of Splice, which stars a humanoid creature, there was a price tag associated with removing body parts (it was a costly special effect). Much of my time in post was spent deciding what visual effects shots could be deleted to lower the budget. At the time it felt like death from a thousand cuts, but as is often the case with these things, it had a positive effect on the overall film. It forced me to think economically and remove any shot (or part of a shot, every frame has a dollar value) that wasn’t absolutely essential to telling the story.