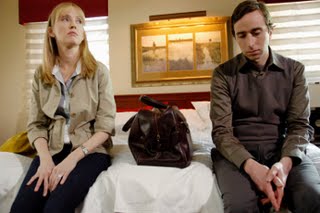 Finding locations with no budget was by far the hardest thing we had to do. There are two specific examples that I think are interesting: We had a one-page scene that took place in an operating room. Finding an actual operating room was impossible so the decision became do we change the scene or do we fake the location? In the end our brilliant production designers Ryan Kravetz and Eunice Bae dressed a corner of a room with a few boxes of medical-looking equipment, hung a curtain in the foreground, and set up a desk with a blue cloth on it as the operating table. The brilliant stroke was our d.p. Orson Robbins-Pianka’s decision to hang a strong top light and keep the room mostly in shadow. The dark and moody final product had absolutely nothing to do with a real-life operating room, but it was absolutely beautiful and perfect for the tone of the scene.

Then there were the six pages that took place in a hotel lobby. We had the opportunity to use the grand lobby of a New York City hotel for $4,000, but we decided that we couldn’t afford that and put our production designers to work again. We took the corner of a hotel room, set up a desk on apple boxes, put a luggage cart in the foreground, hung a red curtain and rented a chandelier to hang in the background. Unfortunately in this instance the final product looked terrible. It was claustrophobic and had no sense of place. And we couldn’t hang the chandelier back far enough for it to read as anything other than a halo of lights behind our main actor. Watching the scene makes me cringe and wish I had spent the money on the lobby, even though it seemed unreasonable at the time.