Week Two at the Edit Center 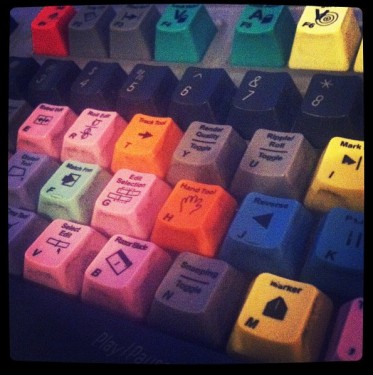 It is the first day of my second week at The Edit Center and we are no longer paired off with partners. Left alone with my computer, I cannot remember how to do anything. Alan Oxman (whose editing credits include Control Room, Happiness and Welcome to the Dollhouse) has joined us, as our teacher. We are to start working on a feature film currently going into post-production. The film is called Happy Sad, written by Ken Urban and directed by Rodney Evans. I am delighted to learn that my friend Maria Dizzia is acting in it. We have all read the script over the weekend, and are each given a hard-drive with footage that will comprise one scene of the film. We are to start editing our scene together. Every one begins working like busy bees, while I stare in despair at my keyboard.

Oxman is a man of enormous patience. He sits with me on and off for the rest of the week. If he can teach me how to edit, he can teach a space alien how to edit (space aliens: if you are in fact all great editors, then please insert some non-editing entity into that sentence). Oxman shows me how to create interruptions and looks, which is often how an editor finds a rhythm and natural flow to a conversation between actors. I am easily frustrated, resistant, and all around difficult to teach. My hands don’t seem to listen to my brain, and my brain – let’s just say it – isn’t working at full capacity either. Slightly dyslexic with numbers, and completely without any sense of direction, I move things left when I want them to go right, I “ripple” when I want to “roll” (both names of edits). I know what I want, but I don’t know how to get it. I even manage to press a combination of buttons that turns on the voice program for the blind, which is apparently, a first for a student. Oxman spends hours with me and never loses his temper. He shows me how to do something, then undoes it, asks me to do what he just did, then to repeat, and repeat and repeat until it very slowly seeps into my muscle memory.

At the end of the week Evans visits the class to look at our scenes and talk with us about them. Miraculously I have some semblance of an edit to show him. The scene I have been given is of two people having an intimate conversation in a bar. Evans watches and gives me a few notes that I feel I can address. He moves on to look at the next scene and I exhale. Two weeks down. Four to go.