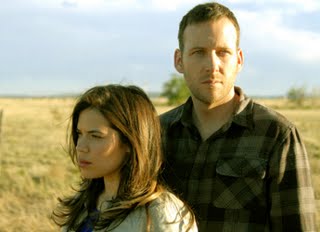 I was born and raised in Texas and have a strong loyalty to the state. One thing I’ve known since I was a child is that while they may appear to be similar, New Mexico and Texas might as well be Venus and Mars. The Dry Land’s characters, setting and nuances are all rooted in Texas. However the lack of substantial tax incentives in Texas made it very difficult to argue for a Texas shoot. With this in mind my financiers pushed for me to consider shooting in New Mexico. Offering a 25 percent film rebate it was very difficult not to seriously consider the idea of shooting in New Mexico.

After looking over the budget, I quickly realized that a Texas shoot would come at a great cost. With our budget I could basically shoot in Texas on a digital format with a limited crew and a local cast or I could shoot in New Mexico on Super 16mm with a sizable crew and a stellar cast. Ultimately I knew that if I wanted to achieve the film I envisioned I would have to shoot in New Mexico.

My great challenge would be to create west Texas in New Mexico. After several location scouts in New Mexico I knew it was going to be incredibly difficult to sell one world for the other, but it was possible. My location manager, Holly Roach, and I searched all of the areas around Albuquerque high and dry. After weeks of scouting we were able to carve out several key locations to cover 90 percent of our interior work and roughly 75 percent of our exterior work. With a great deal of ingenuity by my producer and line producer (Heather Rae and Mark G. Mathis) were able to carve out a splinter unit shoot in Texas that would allow me to fill the film with the nuances needed to sell the film’s world for Texas.

At the end of the day I feel like the decision to shoot in New Mexico was the best decision for the film. Financially the decision allowed me to afford the production value I had hoped for, and creatively the decision forced me to constantly think outside the box. In the process I also discovered that the New Mexico crews are some of the hardest working and most passionate group of individuals I’ve ever met. Every step of the way our crew pushed the envelope of our limitations in order to achieve the look we were going for. At this point I would shoot another film in New Mexico in a heartbeat.