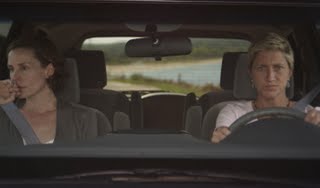 For the last eight years I’ve taught directing at Columbia University’s Film Program — in my opinion, the best, most comprehensive film school anywhere. More than 25 of my students, past and present, were all working on 3 Backyards in a variety of positions ranging from production designer, co-producer, editor and script supervisor to key p.a. and craft services. One student in particular, Russ Harbaugh, decided he wanted to be part of the entire process, and so he signed on as my assistant. One day during preproduction I dragged him to the parking lot of a local grocery store so we could put fliers about my film (asking for local donations and support) on the windshields of parked cars. Standing a football field’s length away from him in the sweltering sun I held up my hand showing him first four fingers and then five fingers. Later on, he asked me what the four and the five meant, and I said, “I’m 45, Russ. I’m 45 and I’m standing in a suburban parking lot covering the windshields of cars like I’m advertising for the senior car wash.” And I couldn’t have been happier. The most complex decision I made during the making of 3 Backyards wasn’t a casting choice or a crew firing or anything that specific. It was about how I would embrace the experience.

I have worked on films where my department’s total budget was twice what I had to make 3 Backyards and yet I have never had a more satisfying, challenging, creative experience in my life. Unlike my two other films, growing older had put me in a position where I could listen to and take advice from everyone around me. I tried to be open and receptive and acknowledge good ideas and to foster an atmosphere where people felt invited to do their creative best. We had so little money that every time some other piece of equipment or prop became unavailable to us I would say to the crew, “Well, the audience hasn’t read the script. They don’t know what we wanted so we’ll just get something else.” I am so indebted to the entire crew — people like John Shim (dolly grip), Mike Prall (second assistant camera) and Atilla Yucer (a.d.) — not because they helped me make my movie but because we collaborated to make our movie.

I used to have a secret guilt that by making a low-budget movie I was “stealing” something from the crew — their work, their energy, their time. I have come to understand that that was a form of condescension, as if they didn’t have their own good reasons for working on the film. On 3 Backyards I worked in a manner I hope to work in again: respectful of the people working with me and aware of the fact that all filmmaking, even microbudget filmmaking, is a privilege when you get to do it.