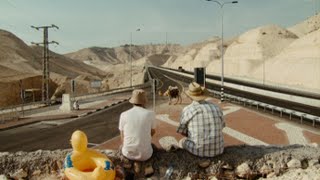 Fix ME… The hardest decisions during the making of this film were all connected to the recording of my personal therapy sessions.

From the beginning I wanted those sessions to be honest and real. I wanted the doctor to do his job and to treat me during the sessions as if the camera does not exist.

But on the other hand, as filmmaker I also wanted to be sure that I have enough interesting material coming out of the filming material of those sessions.

I had to make an important decision: Who would take control over those sessions — the patient, “the filmmaker,” or the doctor?

I made a decision to leave the filmmaker’s agenda out of the therapy room and to give absolute control to the doctor.

I agreed with my psychologist that the cameraman would film from behind a one-way mirror window, and he will always be a foreigner who would not understand the Arabic language.

Also I agreed with my doctor that I would not review the filmed material before the end of the last therapy session.

I simply gave control to the doctor, and such a decision was so risky for the project, but honestly I was so glad when I started to look to the material after the last therapy session and found that reality always gives much more interesting moments than most well-written lines. That is why I love documentaries.