Apocalypse School: John Huddles on After the Dark 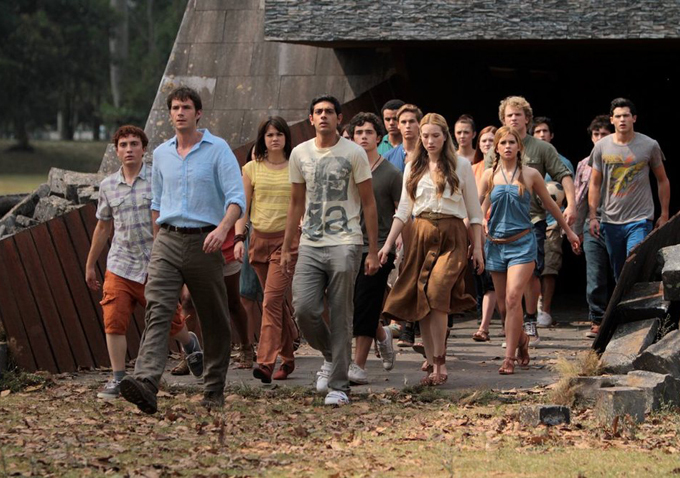 by Brandon Harris
in Directors, Interviews
on Feb 7, 2014

After the Dark, John Huddles

Titled The Philosophers in Europe, John Huddles’ most recent film After the Dark is a sneakily beautiful, remarkably thoughtful rumination on the final day of school for a portion of Abercrombie & Fitch photo shoot-ready philosophy students at an international school in Indonesia who engage in a thought experiment with their equally fetching professor (James D’Arcy). The experiment? Were the world to be nearly destroyed that very day by nuclear war, who amongst the group would be chosen to take shelter in a bunker, one too small for all of them, during the atomic holocaust and be charged with repopulating the world?

Feelings are hurt, suppositions about the value they hold to each other upended and despite the hypothetical nature of events, they proceed with a tension and genuine feeling that is often absent from high-concept genre filmmaking. The often bravura fantasy sequences, many of them shot in and around Mount Bromo near Jakarta, are blended quite well with the film’s quieter moments and Huddles’ adventure film of ideas holds together despite the inherent tension-sapping fact that the events are not the reality of the world we’re observing — all the characters are quite safe, but in his deft handling yet may be forgiven for forgetting.

After the Dark opens via Phase 4 Films today in both New York and Los Angeles. 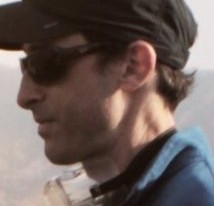 Filmmaker: Where did After the Dark start for you as a writer? How did it germinate?

Huddles: I can’t deflect any of the blame, it was my thought, my concept. I wasn’t ruminating on it at any particular length as a story. But what I had thought about for a while was what interests kids at the movies. Or what potentially interests them that is different than what they’re normally offered, because I personally am constantly surprised at hearing how incurious kids — by which I guess I mean teenagers, twenties, maybe even a little younger than teenagers — ultimately are. I can’t figure how incurious they are. It makes them sound like they’re robots passed their pleasure machine devices in their hands. And that’s just not the kids I encounter who, excuse me, are more curious than adults as a function of being that age. So that was what was percolating for a long time. I didn’t set out to prove anybody wrong or anybody right, but I was definitely interested in trying to construct a story that if I was lucky would be thought-provoking for kids at that age, it would test this premise that I’ve kind of expressed to you, which is that kids are really smart. At that age, the window of passion [is wide open] about ideas, right and wrong, good and evil, morality — you don’t get that curious again. I hear adults saying all the time, “Kids don’t care about any of that.” So it came out of that impulse and the story was shaped around it.

Filmmaker: It’s an unsolvable problem that they’re posed with in the narrative — was it at all difficult to make the movie dramatic in the writing because it was centered on this conundrum involving a thought experiment?

Huddles:  That’s an interesting question. I guess the key part of it is in the writing, because as a result it is not for me to say, it’s just for you or for other people to say how dramatic it is. Does it work, does it not work? But the one thing I tried to stick to in the writing was to just be straightforward about these characters who happen to be at a younger age and not to try to impose upon them and their emotions and their interactions a false, adult, skewed dopiness or rivalry with one another. My hope was that organic drama would be the result of that. Just letting them be who they were, not making them the types you find in movies.

Filmmaker: Regardless of what Syd Field or Aristotle says, I find that people who are uniquely human, recognizably so, can be the source of much drama and can be very compelling in the movies without their being the accoutrements of a traditional plot or a goal-oriented protagonist who’s desperately searching for something.

Huddles: I agree with what you just laid bare, because of the structure or lack of structure of the story. I often ask myself, “When are we going to find new forms for movies?” Are we supposed to keep churning out 300 Aristotelian tri-part types, obviously structured, first, second, third act films for the next five years, 10 years, hundred years, thousand years? Who is not bored of that yet? A great movie in a traditional structure is a great movie. But a bad movie that slavishly binds itself to a traditional structure is still a bad movie.

I’m personally interested in playing with structure, not gratuitously, but in a way that feels right for a particular story without worrying, “Have I just handicapped myself from the start, because the structure veered this way or that way and it just doesn’t fit?” Doing it the old-fashioned way, I would rather chew glass. And I’m totally convinced that before kids are habituated to thinking, that’s the only kind of movie that makes sense. They’re open to any kind of structure.

Filmmaker: Generally it’s a very difficult proposition to make a high-concept genre movie, and to get them financed is often cast contingent. What was that process like of casting for finance?

Huddles: I wish I had a great story for you here, but the less sensational truth is that we just went about the process. You are always trying to drive all parties toward the center, and that includes cast and financiers. We had people who were interested in making a movie with us, great co-production partners in Indonesia. We had lots of able actors who, yes, were not well known and they’re not all between 150 and 1 on the IMDb star meter, but for people that age some of them have been in quite a lot of large films. Harry Potter movies, James Cameron movies, etc.

So they weren’t complete unknowns. We weren’t trying to promote the project strictly on the grandeur of the concept. I think that when you show a serious sense of purpose and when people like the material and they like you, there’s a comfort zone of all parties toward the joint effort. And everyone said yes. There was no magic bullet to take the project to a big, bankable star. Because we’re not an expensive movie, to be fair, compared to other greenlit higher-concept movies that are out there.

Filmmaker: Did you have to design more in pre-pro than you normally would because it’s such a effects-laden movie?

Huddles: I love the architecture of filmmaking and I really enjoy the problem-solving equation of this visual with that camera moving while this atomic detonation is going on in the background. All that is particularly fun for me and my natural inclination to be precise and detail-oriented in events as possible. I think there’s a lot of be said for that kind of formalism in movies. I see so much sloppiness in filmmaking that it’s always driving me to push against it. I enjoy aspiring to be the opposite of that and making each shot deliver something of value. All that said, I think that what your question gets at is the crucial thing, which is you really need to be ultimately loose enough to find value and maybe sometimes even greater value in the moments. So I certainly look at that as a challenge for me personally going forward. You need to really have everything under control to trust in the moment by moment of filmmaking, I find. So maybe I’m a formalist in search of my looser self.

Filmmaker: Why Jakarta as a setting?

Huddles: The choice was either to set the story and shoot the movie in an obvious place here in the United States or [to shoot] somewhere else. I mean, you set it at a high school instead of an international high school, but it could’ve been a high school in Boston or L.A. It could’ve been anywhere. It wouldn’t really have undermined the core concept. So then it was a matter of looking at it and saying, “Well, what adds value to the story in a) cinematic terms, b) in humanistic terms, with respect to a diverse population and reflecting on the world as it is now?” I wondered what would challenge both the people making this film and the people who are going to watch the film. A place like Indonesia, which is spectacular culturally and topographically, is great to shoot this kind of project.

It’s just an amazing place and surprising in so many ways. First of all, it’s the fourth most populous country in the world right after China, India and the United States. It has I think 240 some million people, so it’s a major country. And for most of us, and myself at some recent point included, we would’ve had a little trouble finding it on a map. I had studied international relations before I went to film school and I spent a lot of time thinking about the rest of the world and how we interact with the rest of the world. I just think there’s so much opportunity for exploring stories about the rest of the world that we don’t by default really think of too often. I’m not saying this story in particular was about Indonesia, it really wasn’t. But it went halfway toward that by incorporating that kind of human and visual balance that one can find in that place. I felt that there was no reason not to do it. I’m a really huge fan of Peter Weir and a favorite old movie of mine is the The Year of Living Dangerously, which even though they shot it in Philippines, was set in Indonesia, in Jakarta. In a Jakarta that’s long gone and unrecognizable now.