THE TRIAL OF JOSEF K 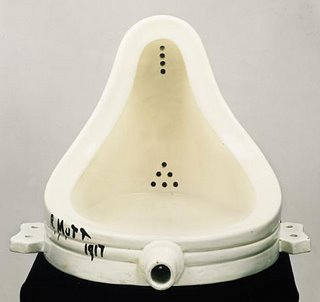 Susannah Breslin has a positively surreal interview at Radar Online with Ira Isaacs, the 57-year-old L.A.-based director currently awaiting trial on obscenity charges for his, um… scat videos. Kudos to the photo editor at Radar for the two improbable shots that run with the piece — one of Marcel Duchamp’s famous urinal (voted in 2004 by a group of art critics as the most influential piece of art of all time), and the other of Martha Stewart.

On her own Reverse Cowgirl blog, Breslin had previously written about Isaacs and the novel defense he’s mounting against the charges that his videos Laurie’s Toilet Show and Hollywood Scat Amateurs 7 are obscene. She called it the “Two Girls, One Cup Defense.”

And perhaps most interestingly, Isaacs and his lawyer, he says, intend to pursue an unprecedented legal defense. The 2 Girls 1 Cup defense, that is. Isaacs explains: “‘What it is, is, there’s videos all over the internet of millions of people watching this [Two Girls, One Cup] video, and it’s a shock video, and people record their reactions…’ ‘[T]he idea is, millions of people are watching this video… and they are not, I think, obviously looking for prurient interest to masturbate. People are trying to shock themselves, because in today’s world, everything is shock on TV… People need a lot to be shocked these days… What I’ve done is, I think, really shocked people, and I think that’s why the federal government is on this case.'”

She also links to Boing Boing, which has a similar story. In that piece, a poster named UndergroundBastard offers some legal commentary:

In United States v. Gugliemi (819 F.2d 451), the 4th Circuit Court of Appeals considered the legality of bestial pornography, sided with Alan Dershowitz’ contention that the grossness of the events depicted in the defendant’s film, “The Snake F**kers” was so extreme as to not appeal to the prurient interests demanded of the pornography standard. In short, it was so gross it was beyond pornography, which is what the defendant here is arguing.

In her interview, Breslin talks with Isaac and discovers that he has the heart of an independent filmmaker;

RADAR: How did you get started making these movies?
IRA ISAACS: When the Internet was happening, I wanted to enter it in some way, and I wanted to do something different. In the past, you needed a lot of money and people to make a movie. Until video cameras were invented. Then the Internet was a big breakthrough for distribution. So, I started making a lot of money with these fetish shock videos. I was distributing shock art films from Europe.

What do you mean by “shock art films”?
You talk about art? What is art? Art is what artists do. If it shocks you, it’s art. One of the things art should do is make you think and question things. Shock art has always been something that has been a very popular thing through the 20th century and the 21st century. People used feces as shock art. There was a guy who shit in a can and sold it for the price of gold. [In 1961, Italian conceptual artist Piero Manzoni canned his feces in 90 tins and sold them for the price of their weight in gold.] So, the Internet allowed me to be an artist, to reach a lot of people. It allowed me to be on the edge, to do what I would never do as a fine artist. If you’re going to paint, you’ve got to compete with Picasso. If you want to write a great classical music piece, you’re competing with Mozart. I would never write anything like Kafka’s The Trial. If I was going to make a mark, I was going to do it in some extreme shock way.

Later in the interview, we learn that Isaac’s Kafka reference is not just some random musing:

So you were indicted.
In July [2007], they indict me. This has all been very surreal. I’m a big Kafka fan. I always dreamed to be Josef K. [the central character of Kafka’s The Trial, who wakes up one morning to find he is being prosecuted for an unknown crime]. And now I am. I’m rereading the book, and I see the similarities. In fact, the director’s credit I use in all my films is Josef K. I am Josef K., the character. Now I get to play Josef K. I get to go to court and do all these things. This whole thing is art. Now I get my 15 minutes of fame.

Boing Boing quotes from a piece by Mark Kernes at Adult Video News:

One charge, however, that hasn’t been seen before in a case involving adult material accessible from a Website is under Chapter 47 of the United States Code, Sec. 223(d), “sending or displaying offensive material to persons under 18.”

That section reads, in pertinent part, “Whoever, in interstate or foreign communications, knowingly … uses any interactive computer service to display in a manner available to a person under 18 years of age, any comment, request, suggestion, proposal, image, or other communication that is obscene or child pornography, regardless of whether the user of such service placed the call or initiated the communication; or knowingly permits any telecommunications facility under such person’s control to be used for an activity prohibited by paragraph (1) with the intent that it be used for such activity, shall be fined under title 18 or imprisoned not more than two years, or both.”