That was quite surreal. I’ve been to just two events like that before, so the red carpet shenanigans, seeing so many “movie stars” and directors you’ve listened to on DVD commentaries, and being in a room with so many people you’ve tried to get financing from – is really a strange experience. The kind that makes you all wild eyed and sweaty palmed. But mostly I was really truly just very happy to be there and felt very safe that we weren’t going to win anything and that I was just lucky to be included, to be in the group, to get to see this crazy kinda show in my life. When we all sat down, I told some of my producer filmmaker comrades that I hadn’t prepared anything to say cause that just felt so hubristic, and gauche, so vain, and weird – every time I tried my mind just derailed itself.

They said “Yeah, there’s a lot of love for the film, but we’re not going to win anything.” I thought they must know something I don’t, was hurt for about 30 seconds but then went easily back to being quite relieved I wasn’t going to have to go onstage in front of  Jim Jarmusch (to name one of my heroes there).  It was lovely to be there with my filmmaking family, some of our actors – Christopher Plummer, Mary Page Keller, and Kai Lennox – from the film, and just be in this weird scene.

When it came time for Best Ensemble, I was all set to applaud for one of the other wonderful nominees, and was very, very, very astonished to hear the word Beginners called out. I adore these actors, we had so much fun together, such a wonderful creative time, how wonderful to see them honored, but, Jesus, I’M TOTALLY UNPREPARED! Luckily Christopher is such a gentleman, so gracious and inclusive, so nice to me, and he lead the way. But I didn’t shout out to my great friend Ewan McGregor who’s in Uganda working with Unicef, I didn’t shout out to Melanie Laurent who’s in Paris where her first film as a writer and director is coming out!! Damn. After, they send you backstage, you do a little press. Again, Christopher is endlessly funny and generous to me there – which is just kind of mind-blowing. 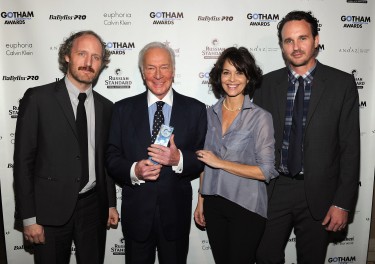 We go back to our table, it’s Best Feature time now. Who gets up to present but my dear pal Tilda Swinton. She was in my first film Thumbsucker. A deep collaborator, she helped me get the film made and actually had a key moment with Beginners; we were promoting Thumbsucker,  I told her I hoped to make something about my dad, from my perspective,  I said “isn’t that so indulgent?” and being the mischievous trickster she replied, “or generous?”

And then Natalie Portman is projected on the screen and explains there is a tie and she describes the films; it’s a very beautiful description, the way you would hope your film is described when you go to heaven, and some of the details sound like it could be us, something about death, about families and connecting. And I hear some people at our table say “oh shit,” and I’m just tripping out that Natalie Portman actually saw and thought hard about our film, and then Tilda opens the envelope and says “Beginners and The Tree Of Life.” Holy fuck. I remember hugging lots of people, but to be honest I can’t remember exactly who I hugged. It was wonderful to go onstage with my cast and producers, to have this line of people that all said “yes” we’ll go on this boat ride with you Mike. Sarah Green of The Tree Of Life and a man I thought was Terrence Malick where accepting their award, and I gave Terrence Malick a nod hoping to communicate my humility, and then heard that he was actually Bill Pohlad. Tilda was staring at me in a way that made me feel like all the numbers from The Matrix were about to start running down a screen in my mind, and when it was my turn to speak I accidentally locked eyes with Mr. Jarmusch making my brain sort of fall to pieces in my hands. 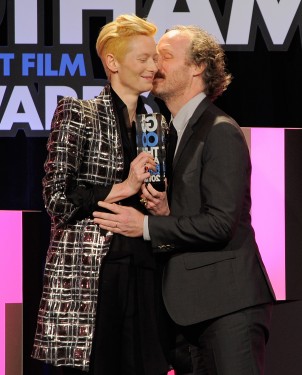 It was very generous and interesting to make it a tie. I think that said a lot about the passion of the judges and broke open the myth that there’s one “winner” when it comes to a year’s worth of films. So many other great films could have been nominated, so many other films could have deservedly tied to win; we all could have tied. I’ll never forget that night (especially the next time I can’t get my film financed!) –  it was like having a flying dream to hear Tilda say Beginners. To be invited to that party, included with those other filmmakers and then recognized in this way is the strongest antidepressant there is. But I think the sanest thing I heard all night came from Dee Rees (from Pariah, winner of Breakthrough Director). While she was on the red carpet, she said (paraphrasing from my wife who actually saw it on the Gotham Awards live stream), “Winning doesn’t make your actual film any better, and losing doesn’t make your film any worse” – that’s a bed I can sleep in.

But the Gothams did, without a doubt, keep our little film alive in people’s minds.

BEGINNERS is now available on DVD and On Demand.