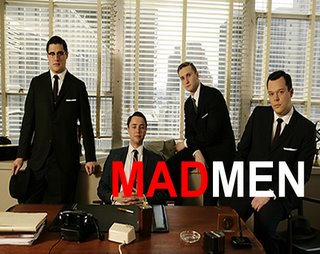 Director Mike Figgis has been posting excellent blog entries at FilmInFocus. Here’s a piece of his latest, in which he talks about great books, the magical expression of writing, and Mad Men.

A few months back I watched an episode of MAD MEN, the American TV series that is based around the advertising industry in NY in the 60’s. I was quite taken by the episode I watched, it seemed to demonstrate my feeling that the best filmmaking and writing in mainstream cinema right now is coming out of US TV. I’ve guest directed one episode of THE SOPRANOS and the standard of writing is high. Also HBO has a reputation for less interference than studios and networks. I also shot a TV pilot last year for a network (SONY / FOX) and found it to be (for me) unworkable. SO my girlfriend bought the 1st series of MAD MEN boxset and we sat down to watch the episodes in sequence. It’s well made and interestingly cast…but there is something about the writing that I find almost surreal, and not intentional. It is character based (like Powell) but the characters do not seem at all real. It feels to me like the 60’s are being observed through glass. More of a period piece than restoration comedy. Because smoking is a big deal (advertising themes) everyone smokes all the time. At first this is interesting but by episode 6 it is more like a Python sketch. So it doesn’t seem modern, which is a shame because the 60’s were very modern. Balzac is modern, his dialogue and characters are modern. I will ponder on this as I continue to watch. I can sense that it is post-Soprano, but I also felt that towards the end THE SOPRANOS began to lose its way because the characters began to get unglued from the frame that had been established.