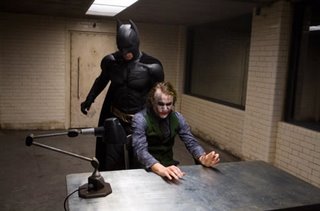 As the neo-cons attempt to return to the glory days of the Cold War, we’ll probably find fewer of them online blogging about the significance of Chris Nolan’s The Dark Knight. If you read my post below, Batman Fights the Neo-Cons, there’s been a back-and-forth in the blogosphere about the ideological underpinnings of the massive box-office hit.

For some people, this is all just silly — Batman is nothing more than a character in a rubber suit. Some of the rest of us, though, get off on such cultural theory wonkery. So, if you are not a regular reader of K-Punk’s blog, I’ll point you to a new post in which he reprints some of the responses he got to his original piece, which I linked to in my post.

The relentlessness of the time-torture motif, and the laying bare of all its psychic contradictions, is quite a testament to how impacted in it is in the American mindset (and it wouldn’t be too farfetched to see DK as a kind of negative-dialectical dismantling of the reassuring virility of 24 scenarios). The real political “problem” with the films (which is also a political insight) is the amorphous impotence/homogeneity of the populace, which perhaps fits in with your Straussian theme. It is a sign of the times that the people is simply a fickle opinionated multitude (or a *family*) to be pacified by the mythic trappings of the Law, saved by the scapegoat-outlaw, or on the brink of nihilist anomie (save when the individual – as in the 2 ferries, with their ethical criminal and hesitant “upright” citizen – chooses the good, AGAINST THE VOTE). The social theory of these films if very turn of the (other) century: Gustave Le Bon, Gabriel Tarde, etc. (theory of crowds); Pareto, Michels, Mosca (theory of elites and oligarchies). Never a collective in sight (which is not a slight, but a testament to the present parameters of the imaginable).

I have had very mixed feelings about this movie since seeing it – my first reaction was that it was ‘fascist’ (its imagery was what ‘hit’ me first) but the more I think about it, the more meanings it takes on – and it was deliberately contrived to do that. Whatever our ‘intellectual’ vanities (or infantile geek fetishes), we are encouraged to participate in the movie as an event. It encourages repeat viewings , word of mouth buzz and those highly profitable DVD sales (I can see the holographic metal box-set alreay). Along with its hype, acclaim and the seemingly infinite discussion of it, the movie – both as pseudo-event and narrative – is a deafening, oppressive noise.

It is the perfect Hollywood machine – so much and incident it becomes incoherent and strangely plotless. Violence and power as spectacle but savvy enough about its ‘demographic’ to appear ambivalent. It can create flattering illusions of being left-wing, right-wing, liberal, mystical, dialectic or whatever (endless discussion boards and blogs invoking Nietszche, Milton Friedmann, Leo Strauss, Walter Benjamin, Heidigger, George Lukacs, Aleister Crowley, Michel Lacan etc. etc. to discuss a cartoon character in a rubber suit)….

It recklessly toys with contemporary ‘relevance’ and social/political/sexual anxieties while hiding behind digestible pop culture posing (or the reverse in the eyes of some critics).

There are more responses at the link above as well as an excellent post on privatization and the libidinal role of government in neo-liberal societies.

UPDATE: After posting this I discovered this piece on John August’s blog which takes a very sensible position regarding all this superhero parsing.

I’d argue that the thematic success of comic book characters, and comic book storylines, comes from how closely they can approach the line separating Real from Too Real, without crossing it.

For example, this summer’s The Dark Knight is set in the most realistic Gotham City yet, but its characters still speak in broad philosophical proclamations. Just listen to Batman:

Sometimes, dialogue should only be spoken while wearing a mask. His statement makes sense in abstract, but you wouldn’t want it applied to, say, the invasion of a sovereign nation based on false evidence. Even Commissioner Gordon seems to understand that Batman is better suited to villain-thumping than leadership. His improbable answer to his young son’s question about why Batman is running:

Because he’s the hero Gotham deserves, but not the one it needs right now…and so we’ll hunt him, because he can take it. Because he’s not a hero. He’s a silent guardian, a watchful protector…a dark knight.

Efforts to place TDK’s Batman on a real-world political spectrum are doomed. Sure, he’s tough on crime, but he’s also anti-gun. He holds himself outside the law, but destroys his own phone-tapping technology. Is he a Conservative? A Liberal? A Libertarian?

I think fans are responding to this latest wave of superhero movies not because they’re more realistic, but because they safely insulate us from reality, letting us address epic themes without uncomfortable details. Law versus Chaos is entertaining in TDK, but messy when you look at Iraq. The military-industrial complex is, well, less complex when Tony Stark can simply stop making weapons. And become a weapon. Or something. (The important thing is, he beat up Jeff Bridges, who was visibly evil and bald.)