THE REWARDS OF AIMING HIGH 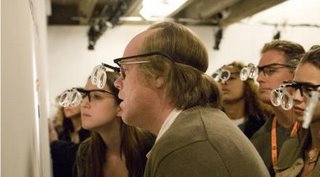 An interesting conversation is developing over at Anne Thompson’s blog, in which she writes about some of the recent executive departures. Of course, the big news this week was Paula Wagner’s leaving UA, and in a piece about that development Thompson references Bill Horberg’s stepping down as head of production at Sidney Kimmel Entertainment. SKE has recently downsized after producing several films, including Charlie Kaufman’s ambitious and out-there Synechdoche, New York, which cost, reportedly, north of $20 million and, according to Thompson, was bought “for a song” by Sony Classics. She characterizes both Wagner and Horberg as being “ill equipped to understand the true meanings of economies of scale” when greenlighting pics like Kaufman’s and Robert Redford’s Lions for Lambs.

In the comments thread, producer Ted Hope has contributed a defense of Horberg, who he is producing Greg Mottola’s Adventureland with. It’s also a thoughtful riff on trying to produce good work in trying times. Here are three key paragraphs, but go to Anne’s blog to read the rest:

Producing and determining budget amounts is a tricky pursuit — one that is far too easy to judge in hindsight. Audiences demand production value and verisimilitude. Actors and directors need time and time is money (at least on film budgets). International sales agents long ago abandoned the by-the-bootstraps production and want high-profile quality pictures. There’s tremendous pressure on all sides ,and neither a few hits or failures determine or define how well someone is negotiating the balance of what determines the correct budget. Some films will never get made simply because producers are unwilling to put in the things that give financiers confidence that the project will sell well. Returns are critical, but so is a film culture that is worthy of being seen.

I don’t know a producer around who wouldn’t be proud to claim Bill’s track record for their own (or part thereof, as I do have particular affection for my own). Producers and executives alike seldom get a chance to initiate or even participate in movies that truly raise the bar — and Bill does repeatedly.

Charlie Kaufman’s SYNECDOCHE was one of the most original and ambitious scripts I have ever encountered (I have not seen the film yet) and Charlie may well be the most refreshing and unique filmmaker of our time. When I first read it, after recovering from the emotional wallop and imaginative tour de force that the pages held, I felt “now here’s a movie you can build and drive a slate around”. As John August recently captured so well on his blog, the profit a film generates go well beyond the financial side of things (collaborators profit! culture profits! companies’ reputations profit!). Yet there are very few films that allow a company to profit in ways that aren’t just purely financial; SYNECDOCHE has, and had from the start, that potential — if one could enact that specific agenda — but we will never get to see that might have been now. Hopefully, people will vote with their dollars for a world that supports such a once every twenty years vision. People gripe about now versus the 70’sin terms of the work that is supported, but when we get a truly unique vision, where are champions then?