AN OBSERVATION IN MARRAKECH: ON “BLACK GOLD” 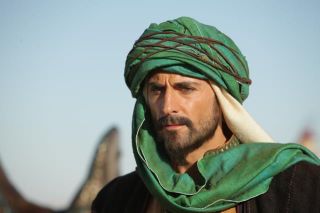 Sign of the times: A big-budget internationalist action throwback of sorts, one with some of the goofiest, most downright absurd conceits you’ll find all year, Jean-Jacques Annaud’s both intentionally and unintentionally funny Or Noir (Black Gold) will probably never see the light of day in the States. Relegating it to marginal art-house material because of its odd place on the contemporary film mantle, in which it has been deemed simply too silly and conventional for the American art house crowd and too high minded and not award season-worthy enough for the big leagues, Warners is only handling the U.K., Europe and a massive roll out to nine Middle Eastern countries between Thanksgiving and the year’s final month before sending the film North in the new year. It was feted this weekend at the 11th annual Festival international du Film de Marrakech, with a gala affair complete with a tribute to Annaud and a black tie dinner in which the jury, headed by double Cannes laureate and generally beloved Serbian wildman Emir Kusterica, ate with the King of Morocco himself. Their was a lot of protein involved. These culturally elite Moroccans (and their French cohorts) know how to have a good time in ballrooms and hotel clubs, even if one is at a loss to find a single non-depressing Competition film. So it is in the land of Cannestan, where we’re all looking for the next most beautifully conceived and executed downer before we head off for free drinks! Black Gold, in this environment, never stands a chance.

Hollywood fun for the Arab masses! Filling, easily digestible and complete with false claims of healthfulness (like most products of American simulacrum), Black Gold is by no means a rich seven course meal like the King’s, but it proves to be a valuable window into a certain type of postmodern studio filmmaking, a cinema of socio-political incoherence that would make Robin Wood sing. The 67-year-old Frenchman Annaud, mostly known on our fair shores as he who is responsible for Seven Years in Tibet, is in no race to make all of Black Gold‘s inevitable, grinding and generously innocuous story beats happen in any reasonable amount of time. Push on they do through 141 often grueling yet never less than uncannily accomplished minutes as one delights in the game efforts of people like Mark Strong and Riz Ahmed, British accents not quite unchecked (but who cares, they’re supposed to be “smart” and “honorable” and they’d really be speaking Arabic anyway), as they plod themselves through ridiculous, under-researched and considered characters, making life seem like its happening on the screen, even if that life resembles King Lear and Evelyn Waugh playing Kabuki Arab or Sam Spade dress up in the 1930s.

Still, they manage to, on an occasional basis, elevate what is a largely languid, under conceived, mildly racist story concerning how Arab tribes coped with the discovery of oil in their midst and the desires of Westerns (read: American Texans) for their geographical blessings. Considering how both absurd and yet reassuringly predictable and tidy everything turns out to be, the movie should be studied in undergraduate screenwriting courses for years. In what could have been a penetrating, politized Arab cousin to Their Will Be Blood, Antonio Banderas proves fun and ridiculous yet again, Tahir Rahim does a convincing Mark Walberg impression for half the running time and Freida Pinto is at best pretty unconvincing, but all of it matters little.

Covered in the sheen of professionalism and “craft”, stock full of Indians and Spaniards and English-born Italians and Pakistanis playing Arabs who naturally speak English in slightly broken or slightly British intonations (this is simply unacceptable in our moment in time, or at least it ought to be), it’s a somewhat miraculous, almost eerie throw back, eagerly sold to the people it’s so subtly demeaning through its vague, dated, innocuously evenhanded discourse about tradition versus modernity, corruption by versus help from the West, and whether the heart of the Arab soul should rest with Islam or Capitalism.

The internationalization of studio release slates is nothing new, but Black Gold does bad Hollywood studio product in the way the studios don’t have the balls to do themselves anymore, at least for audiences back home. Where is our fucking generation’s Rambo III!? It is as contrived, audience-patronizing and oddly outside of history as the most ludicrous studio products of recent times, but too oddly parochial and almost about something to comfortably comfort to American tastes. How I wish Michael Winterbottom could make his Stern gang, British mandate movie! A workman-like product that the American studios rarely bet on their own countryman fawning for these days, Black Gold (Or Noir sounds way cooler) will one day have a small but loyal cult if only for a reference by a Texas oil man to the dawn of $1/barrel oil! How we wish those days were still upon us.