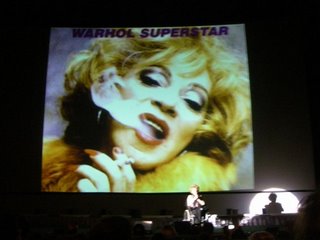 CineVegas programmer and Filmmaker contributor Mike Plante writes: “Not sure why the Off Camera festival in Krakow has gone so unnoticed in the US, maybe because it’s first time and in an unknown city – but I went and it was great, all the filmmakers and jury had a blast, and they give out 100,000 Euros in their competition. Probably the biggest prize of any festival?”

Off Camera was off my radar as well, but I just checked out Mike’s blog postings and they detail a spirited fest with a good, artistically attuned line-up. Here’s his account of Holly Woodlawn at the Closing Night:

Then a moment to take the night up a notch. Director Paul Morrissey brought Warhol legend Holly Woodlawn to the stage in a wheelchair. She thanked the crowd and fest for a good time with the Warhol retrospective (they not only screened TRASH, but you got it on DVD with the official catalog – she also performed a live show “Tea with Holly” during the fest), then exclaimed the festival wanted her to sing. She made herself more comfortable without her jacket. The crowd went nuts as Lou Reed’s “Walk on the Wild Side,” written for her, started to play. The giant screen behind her displayed stills of her career, as she sang along on the mic as the song played. When the crowd sang “do do-do do-do” at her command, you felt strange and special. Morrissey came back to get her to more big applause.