Donal Mosher and Michael Palmieri on Off Label 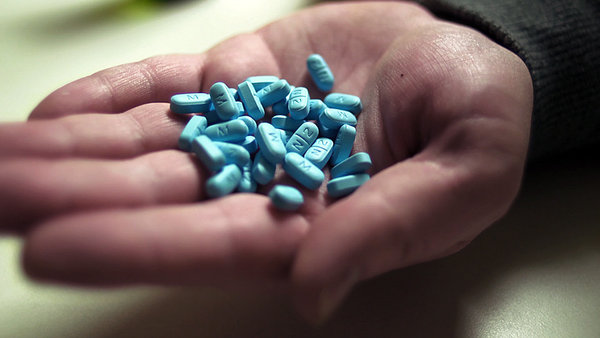 by Brandon Harris
in Directors, Interviews
on Aug 12, 2013

The ubiquity of Big Pharma’s influence in modern medicine isn’t news and given the ever skyrocketing prices for many prescription medications, it’s ripe territory for outrage, but in their newest documentary, filmmaking team Donal Mosher and Michael Palmieri aren’t out to stoke your anger, but engage your empathy and your intellect. Their new film, Off Label, follows the lives of eight Americans, most of whom exist on the margins of society, whose lives have been utterly transformed, usually for the worse, by prescription drugs.

In places like Iowa City and Detroit, the duo find story after story of addiction and bankruptcy, of chemical dependency and emotional turmoil suppressed. Several individuals profiled by the filmmakers are human guinea pigs, who take new prescription drugs in clinical trials in exchange for small sums of money, or in the case of one 60-something African-American man, because he was an inmate who was forced to under threat of punishment while in prison. The most heartbreaking story involves a woman whose son killed himself after being assigned a mentally toxic mix of anti-depressants while attending university. Eschewing the whole facts-and-figures and talking-heads style for a more lyrical approach, Off Label is steeped in the elliptical style the filmmakers brought to their previous film, October Country, one which gives the disparately connected stories heft while the style contains a velocity and an eye for beauty that separates it from most issue-oriented documentary filmmaking.

Mosher and Palmieri, whose debut October Country this publication nominated for the now-defunct Best Film Not Playing at a Theater Near You Gotham Award in 2009, went on to be nominated for an Independent Spirit Award the following year as well. Off Label had its world premiere at this year’s Tribeca Film Festival and also appeared at the San Francisco International Film Festival in April before bouncing around the American regional circuit this summer. The film opened commercially via Oscilloscope Laboratories on Friday at the IFC Center in Manhattan and the Laemmle’s Royal Theatre in West Los Angeles. 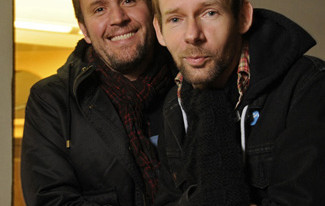 Filmmaker: Where did this start for you guys? Both of you have some experience taking prescription meds, as almost everyone does, but what sparked your desire to travel the country and find people who could illustrate this particular moment in time when they are such a pervasive part of American life?

Palmieri: The film started because we met Anish Savjani and Vincent Savino, who have this company Film Science. They’d seen October Country and they asked us if we’d be interested in making a film about human guinea pigs. So that was the starting point.

Filmmaker: So they pitched the film to the two of you instead of vice versa?

Palmieri: The initial impetus was they were very interested in this series of articles that had been published in the early 200os. One of them was a Wired magazine article the other was a New Yorker article by a guy named Carl Elliott. The Wired article was called “Drug Test Cowboys” and I believe and the article by Elliott was called “Guinea pigging.” They were interested in making a film about human guinea pigs because they thought it was a sort of crazy concept and we were interested as well. So we decided to give it a shot. But just within that subject matter, there wasn’t something that could sustain a feature, for reasons both practical and emotional. On the practical level, it’s very hard to get into those studies or to crack through pharmaceutical barriers. So we expanded it from simply guinea pigging to the way that pharmaceutical companies market drugs and how those drugs end up in the public. It got more general in a weird way the further we got into it.

Filmmaker: Did you feel an immediate connection to the piece when it was pitched to you? What was the process like of saying yes?

Palmieri: We really like these guys and were really hoping to be able to work with them sometime. We felt like they presented something we knew very little about but were very interested in as soon as we started reading some of the articles they had forwarded on to us. I think from very early on we started thinking of this as an opportunity to see, “Can we make a film that  doesn’t necessarily behave like an issues film?” In the very loosest terms. Those films are very informative and very interesting to watch. I like them. They aren’t necessarily the type of thing we would want to explore because it’s not necessarily how these things pan out for us. The grey areas of anything this size, of medical issues this big, don’t necessarily lend themselves to a simple story where there is a villain and a victim and stuff like this. The more we got into it the more we were persuaded of the issue’s complexity by the material we were getting; its refusal to be boxed in was the most interesting thing.

Filmmaker: How did you meet these individuals? They’re such a wide cross-section of people.

Mosher: The people we’re most interested in as filmmakers are people who are marginalized. That was our vetting process. Because this is such a pervasive issue, you could have a cast comprised completely of middle-class characters or upper-class characters. We wanted people who were a little more eccentric, a little more on the edge. That was the first vetting process. Some of the characters were already in place because of research already done by the producers. Some people wrote to us when we announced that this project was happening. Every time we would open our mouths, we would meet someone who had an interesting story. The amount of response we got while we were looking for characters speaks to the pervasiveness of the problem.

Palmieri: Carl introduced us to Mary Weiss as well as Bob Helms, two of the characters in the film. Bob is one of the most famous guinea pigs. It’s one of those things where you start talking about the project you’re working on and people just start coming your way. Certainly when we started honing in on the people we were focusing on, it became very clear that there were people we were following who just wouldn’t work. Mainly because they didn’t fit into the whole margins category that we were discussing before. Early on we did an enormous amount of interviews with people who would be considered experts on the subject. There were a number of people in the medical field, the writing field, the pharmaceutical field, who we interviewed. The problem was that they weren’t characters. What we wanted to do with the film is provide you with a human dimension instead of what I’d call a fact-based approach. We were dealing in facts, but what we were more interested in was the human dimension of the problem versus the statistical dimension of the problem.

Filmmaker: Were there things that you shot which were particularly difficult to let go of in the cutting?

Mosher: The hard part is that, the deeper we got into the filmmaking, the more we realized the pervasiveness and extent of the issue. I can think of 25 stories we encountered that would make a good film, maybe even a better film. The hardest part was not any particular thing, but trying to find some narrow channel to take what we already had and make it work. When I think about the film or reviews come in for it or I watch it again, I think about so many different angles that we could have taken and I hope someone else will.

With the last film, because it was my family, I think Mike and I had a particular insider/outsider relationship there that worked really well with October Country, because if I was too personally invested in it to see the characters as characters, it would curb me. Off Label was more of a challenge, but more of a distinctive collaboration because we were both approaching strangers and shaping character stories from our distinctive points of view. It might be more rough hewn, but in the sense of understanding each other as collaborators and artistic partners, it was a really great experience for that.

Palmieri: There is also a practical issue when we were editing it that is worth bringing up, I think. One of the advantages of October Country is that it is one family. It’s one family under one roof in one place. This film attempts to bring a variety of personalities from around the country into dialogue with each other who never encounter each other in real life. They only intersect by way of the issue at hand that we’re addressing. It’s eight different people who are only connected by pharmaceutical medicine. As an editor it is the hardest thing to do because you don’t have a similar reference point for each story. Orienting the audiences to the actual physical environment or orientation is not as easy to get to. It was an interesting challenge for us because we were trying to bring the United States in general into relief. The hardest thing about cutting this film were those elements. Everyone was distinct. We couldn’t rely on the type of shorthand we did on October Country.

Filmmaker: How long did it production take? I imagine you shot piecemeal, booking and acquiring other subjects, revisiting others, as the edit took place?

Palmieri: We started filming it before October Country even came out in theaters. We started filming in the beginning of 2009. We had to put it down for a little while because October Country was playing festivals and we were traveling with it, but we were constantly involved in the process of this. We ended up shooting this film for over two years and then we allotted ourselves about seven months to edit. You’re editing the whole time obviously, you’re sussing things out, but the real intensity of the editing and structuring happened over a six- or seven-month period to submit to the early festivals of the beginning of the year, and then another two or three months after those submissions to really find the emotional space to make the film work. For us it usually takes about eight months to edit something. We don’t shoot an enormous amount. This one was particularly complicated once again because of the different environments we were trying to create in each of the stories. To have them be unique spaces that can merge someway via the editorial process.

Filmmaker: Have the subjects seen the film?

Palmieri: Most of them have. They all really like it. The only person we’ve had difficulty getting it to is Yousef Anthony, Eddie. He was in Holmesford prison and he’s sort of hard to reach, he has a phone that’s always turning on and off, but we’re trying to get the film to him. We’ve had a number of the subjects at the screenings and festivals and stuff and they’ve been very supportive. A few months ago it was an honor to show the film in Minneapolis, where Mary was present. That was an extremely emotional experience for a lot of people there in Minneapolis because her story continues. There is stuff going on at the University of Minnesota because she’s still battling the university over this and she’s changing laws there in the state. So it was extremely gratifying to show the movie in her hometown.