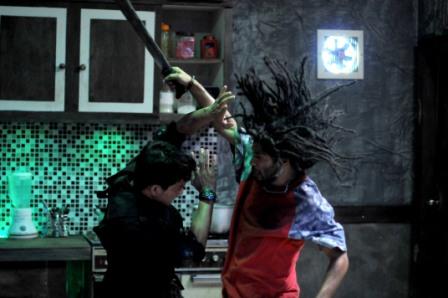 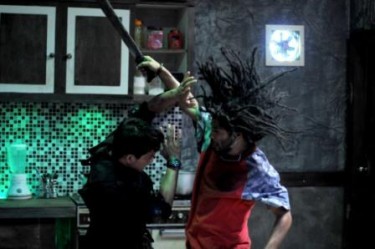 I’m the guy that makes stunt performers take multiple kicks to the head for the pleasure of what I hope is a captivated audience. I ask a lot of people. I deal in blood and mayhem.

As a kid I was obsessed, and still am to this day with the incredible work done by my childhood heroes. My friends and I would re-enact everything we’d seen, doing remakes of our favorite films in my back garden. 8 year old kids running around swinging punches and kicks, diving across the lawn. Back then I wanted to be an actor, back then I wanted to be Jackie Chan. But a few years and a lot of burgers later and I set aside those aspirations and moved in a somewhat less physically demanding direction.

So why film? Why not any other medium? I can conjure up ideas and images in my mind – scenes and situations that I can see and hear in great clarity when it’s just me a notepad and a pen. But getting these thoughts to exist in reality purely by my own means is impossible. I’ve never been gifted when it came to art. I lack the patience and expertise to be a photographer and as everyone who knows me well would confess my rhythm, or lack of it for that matter, has always been in the way of any musical aspirations I may have once had.

I’ve had to search for a means of expression. And so now, I’m a director. I gather a large group of insanely talented artists to do the hard work for me. To make each image, performance and scene come alive as I dreamt them. They do all this while at the end of the each project I get to take credit for the vast majority of it. But it’s the teamwork and the efforts of a dedicated crew that make any film a success, not a sole voice.

As I orchestrate a fight sequence it becomes an ever changing, living, breathing piece of work that shifts with the improvisation and creativity of others. Sometimes nature will play a hand making the intention of each movement differ, sometimes for the worse but occasionally for the best.

I downplay my abilities in other mediums, and I genuinely would love to be better at each. But the truth is, the most breathtaking landscape paintings, the most amazing still moments captured forever in a photograph and the most touching chord of a piece of poetry in music just doesn’t come close to those 24 little frames of perfection when my fighters give it up so that their audience can draw a collective gasp as they witness that all too brief but crystal clear shot… a kick to the head.