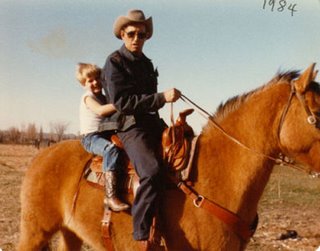 Taylor Greeson’s Meadowlark was a happy discovery for me while sitting on this year’s “Best Film Not Playing at a Theater Near You” Gotham Award panel. I didn’t know Greeson and hadn’t heard of his film. But I, along with the panel, responded to his formally ambitious mixture of crime-reconstruction film and personal documentary.

“When I was twelve years old, my brother was murdered, I lost my virginity to a twenty-year-old man, and I was ordained with the priesthood in the Church of Jesus Christ of Latter Day Saints.” So begins Meadowlark, Taylor Greeson’s quietly devastating self-portrait, in which the filmmaker tries to make sense of those twinned experiences of tragic loss and first love. Greeson weaves together footage shot in his native Montana and in New Mexico with home movies, taped phone conversations, newspaper clippings, forensics reports, and testimonials by family members, investigative officials, and even the murderer himself to create an autobiographical documentary that is at once mysterious, haunting, and full of grace.

Along with the other directors, I asked Greeson to send us some thoughts connecting his film to the world around us right now, and here’s what he wrote.

I had a couple of thoughts. While I was making Meadowlark, it (oddly) never occurred to me just how personal the film is. At a certain point I lost any sense of this-is-too-personal-to-share and the momentum of the film kept me moving forward. As I started to screen the film, it became clearer and clearer to me how surprised audiences were by how much of myself I shared with them.

Also, Meadowlark is my first feature film. The fact that I dealt with events like murder and child molestation in my first film has lead many to ask, “What are you going to do after this?” These are not the kinds of events that happen in one’s life every day. When I first heard this question I was worried: Did I make the one good film I had in me on the first time out?! But I realized that I approach all of my work in a very personal way. I’m interested in the gray areas of human behavior, and I often find it most enlightening to focus those issues through the lens of my own experience. Although my next film may not be specifically about me or my family, and it most likely (I hope) won’t involve a murder investigation, I will still approach the material with the same passion and intimacy with which I made Meadowlark.

It’s a fascinating time to be a filmmaker as we are in this moment of transition. People want to be entertained, edified, and enlightened and they are more and more looking toward the internet for content. I’m not sure how this bodes for the feature length film (do people really want to download and watch a 90 minute film on an iPod?!), but I think internet venues have inspired people to make some great short films, and the internet has allowed for experimental films from the past to reach a larger audience. Regarding feature films, I suppose the increasing availability of Video On Demand has arguably allowed films to reach much broader audiences, although I am a big fan of the communal experience of watching a movie on the big screen with lots of other people.

As far as the new administration goes, I have to say that that Obama’s win was a bittersweet victory for me. It was amazing to see our country elect its first black president, but on the same night several states voted to strip gays and lesbians of civil rights, which was an incredibly disappointing thing to witness. On the other hand, I’m currently working on a film about Mormon Fundamentalists and the practice of polygamy, and I think that my own community’s fight for marriage rights is an interesting contrast to the struggles of those who are trying to decriminalize plural marriage.