Four interesting film sites and blogs have crossed my screen in the last few days. The first is indie producer Jane Kosek’s All About Indie Filmmaking blog. (Kosek’s producer site, Wonder Entertainment, can be visited here.) In an email she writes about the blog:

It’s unique as it is geared primarily toward educating others about filmmaking. I find most popular film blogs are very specific toward an audience who knows a great deal about the industry or they discuss specific movies. I am hoping my blog helps people at all levels learn more about the industry. Perhaps if there is more disclosure on how the industry works, especially from the perspective of a producer in the trenches, then we can all learn how to manage it appropriately on the independent side. Right now, the entries are very broad and educational but as I keep going, I will be getting more and more specific and I will marry the issues that are important to insiders with more general topics for those interested in learning more about the industry.

I liked this recent post entitled “Drinks Anyone!” in which she describes what it means to “go out for drinks.”

Many working in Hollywood are juggling overfilled schedules of meetings. They may like running around to meetings all day, but more often than not, their jobs demand it. Hollywood is built on relationships, talent, and trends. In order to stay on top of it all, you must figure out how to tap into this incredible networking machine that runs Hollywood. It’s not hard. Just reach out to others and ask if they would be up for a coffee or a drink.

When starting out, don’t aim too high. Schedule meetings with your peers at your level, i.e. if you are an assistant, meet with other assistants. Then work your way up as you gather better and better intel about Hollywood. Never be discouraged if someone blows you off. It’s their loss, not yours. And over time, you will figure out what kind of networking system works for you. Personally, I found it difficult to be constantly taking meetings day and night so after a number of years, I slowed my networking down to very essential gatherings. But it took years of me running around to get to the point of feeling comfortable to pull back a bit. Hollywood can enhance your life or it can be your life — it’s your choice.

Next, Peter Savarese emailed to say that he’s starting a site, sKarlets that will be a place for filmmakers to upload footage shot on Red digital cameras, particularly the new Red Scarlet due in 2009. The site is being developed and is due to roll out features over the next few weeks, but some videos related to the Red are already posted. 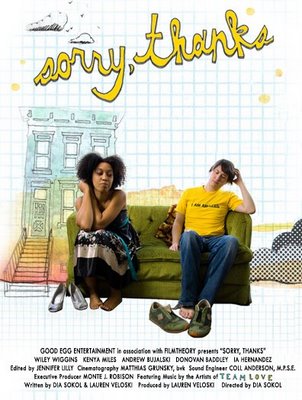 Dia Sokol, who has produced such good films as Woodpecker and Mutual Appreciation, has just directed her first feature. It’s called Sorry, Thanks, it is produced and co-written by Lauren Veloski, and it now has a nicely designed website. There’s a blog, an email list, pictures, a trailer — the usual stuff. The film was in the IFP Narrative Rough Cut Lab, and in the early cut I saw was already very good. You should get a chance to see it sometime soon in 2009.

Finally, Tatia Rosenthal, a 2000 Filmmaker “25 New Face,” has launched a website for her soon-to-be-released animated feature 9.99. The site is gorgeous and clever and it includes this trailer: