THE CALM BEFORE THE STORM 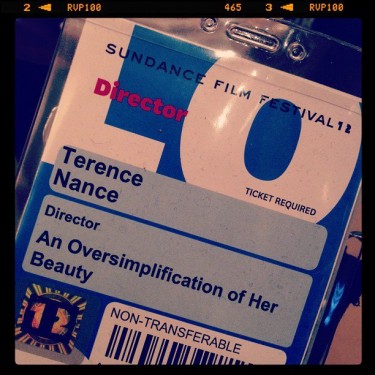 Today is the day. I’ve been working to finish this movie since 2006. There were moments in the six years since putting pen to page during which I couldn’t make this day out in my future. Not that I considered quitting, that isn’t my style, but I did at times feel like the journey of making this film would stretch into eternity. This is not unprecedented, check out Ellison’s second book or Wendell B. Harris’ second movie.

To avoid that fate I had to take an extreme measure and commit myself to working 12 hours a day 7 days a week until the movie was finished. This change was sparked from a conversation I had with the Orisha through a priestess. The Orisha had a simple message that I took to heart.

I accelerated my pace. I have yet to pump the brakes. I rolled into Park City having slept a combined 4 hours in the previous two weeks. This week is the last mile of  my first marathon, one I did not train for.  Me and my brothers Djore, Nelson-Mandela, and Sydney Driver played original music from the film at the Sundance ASCAP Music Cafe. The crowd was hard to move yet hyper engaged. Afterwards I went a great event presented  by  The Black House.

I’ve met so many amazing people since I’ve been here. I spoke to Matthew Cherry. Great guy.  Great filmmaker. We talked new Black Wave. Last Black Wave. Community. Progress. During my photo ops  with my Question Bridge family it is clear that my cue smile is novice. Hank Willis Thomas’ is perfect. Natasha Logan’s is so well tooled it manages to seem different each time it is performed.  With mine the corners of my mouth rise, but my eyes don’t rise with them. The resulting effect is that half my face is smiling and the other half is concentrating on the task (performance) at hand. Emotional asymmetry.

I went to the New Frontier Premiere event. The work is scale-wise EPIC.  The guy who did that Kanye West video POWER had a 3D piece that is destined to be bitten up by some of my future work.  Question Bridge is so necessary as art work and  as a tool for communication . There was a virtual reality news story about poverty. EPIC. The contemporary art set is definitely my scene. The bartenders never have pineapple juice. #idea Sundance should also showcase culinary artists and feature their food at parties.

I met Shari, and felt honored. Met Tanya Wright, the Deputy Kenya Thomas from  True Blood. Met a local volunteer from park city. They were all excited to see the movie. Got home. Saw my team. Saw my sister. Her accent is ever thickening as mine thins itself out. A consequence of not being at home often. The previous a consequence of going fast.  Wake up early – today is the day. 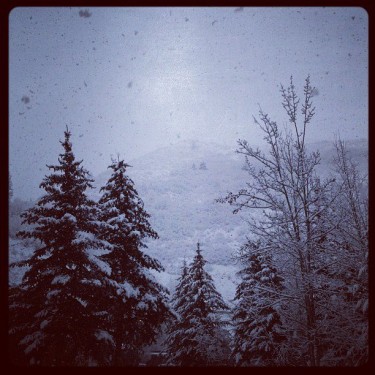 I took 11.7 seconds to look at the snow atop the  mountain and I remember it’s bigger than me.

Namik and I had an early morning interview with Jen Hardman. I hadn’t seen Namik in Utah yet. She walks out of the house. I’m reminded why I made the movie
about her. We go to the interview. The lights are bright. The host is very nice. After the interview, she touches Namik’s hair without asking. Life imitates art.

I’m on the bus going towards the resort for a Directors Only brunch with Hank Willis Thomas, Bayeté Ross Smith, Kamal Sinclair, Maria Abromovich, and Deborah Ann Wool from True Blood. We got stuck in the snow. We are now going to hike up the mountain.

The film is premiering tonight. It’s an ending. And a beginning.