Here Roger Ebert reprints his review of the deficit documentary I.O.U.S.A., which CNN airs this weekend.

Okay, I’m going to reprint my own review out of Sundance — I’ve pasted it below. And I plan to catch the conversation on CNN this weekend because, honestly, I’m baffled by the free ride this doc has gotten, mostly from film critics and bloggers who haven’t scrutinized its claim to being “non-partisan.” Because this doc is about, generally, the economy, and the economy has now collapsed, critics seem to be inclined to give the doc some credit for predicting such.

But here’s the problem: I.O.U.S.A. focuses entirely on the federal budget deficit. And the federal budget deficit has little to do with the current economic crisis. To put it another way, it would be as if I walked into your house and said, “Oh my god, your home is going to burn down unless you replace that gas heater!” You do, and your house burns down… due to faulty electrical wiring. Should I get credit for predicting that?

What’s more, in this current economic crisis, what are the majority of mainstream economists from both the left and the right recommending? Increasing the size of the federal deficit! (Like I said in my review below, the word “Keynesian” somehow never makes it into a documentary about government spending.)

Anyway, here’s my review from January 27, 2008. (This was a two-parter, the first of which covered Josh Tickell’s Fields of Fuel; I’m just reprinting the I.O.U.S.A. part here.)

Compared to the issues discussed in Tickell’s doc, America’s reliance on foreign oil seems like a minor problem. IOUSA deals with not just the U.S. budget deficit but also related topics ranging from America’s trade deficit and savings shortfalls to our shrinking dollar and loss of global economic leverage. Like Tickell, Creadon zippily cuts from a range of interview subjects, including taxpayers, government officials and, also, annoyingly, clueless kids who are asked to guess how big the budget deficit is (answer: $8.6 trillion). The film’s human through line comes in the form of U.S. Comptroller General David Walker, who lectures across the country about the catastrophe awaiting future generations of Americans if the U.S. doesn’t begin to balance its budgets and reduce its deficit. The film also focuses on the activities of the Concord Coalition, an advocacy group comprised of members of both the centrist Brookings Institution and the right-wing Heritage Foundation – political opponents brought together by the looming disaster. 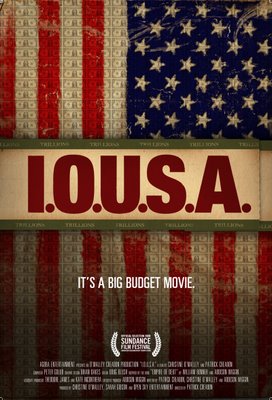 IOUSA is most successful when it finds ways to entertainingly and concisely convey decades of economic history through animated charts, archival photos, and, even, a Saturday Night Live skit. In one sequence a penny is rolled up and down a rollercoaster of a bar graph, illustrating how the budget deficit expanded and sometimes contracted across wars and social program expansions. But while Creadon references some of the customary explanations for the budget deficit, he mostly analogizes the U.S. to the proverbial maxed out consumer who can’t stop spending until his credit card implodes.

IOUSA’s press notes state, “This film is not an endorsement of any political party or political candidate,” and indeed, Creadon’s film initially appears non-political and intended to simply raise awareness about the deficit issue. But here’s the thing — framing a discussion of the health of the U.S. economy by focusing solely on the budget deficit is inherently an idelogical act. “Deficit hawks” can be found all across the political spectrum, but they are most often found on the right and among those seeking to cut social spending and entitlement programs. (Indeed, the recently passed Medicare prescription drug benefit is given a few whacks in IOUSA.) The film is “inspired by” Empire of Debt, Bill Bonner and Addison Wiggins’s book that discusses the U.S. debt crisis from a right/libertarian viewpoint and places it within a larger critique of America as an “empire” that has overextended itself in both domestic and foreign policy. Creadon has left out most of the book’s “America as empire” argument, but he has uncritically embraced their argument regarding the deficit. You’d never know from IOUSA that not every economist is as worried about the deficit as Walker is. In fact, the word “Keynes” – as is John Maynard Keynes, the economist whose work discussed the economic benefits of deficit spending, is never uttered in this doc. Also not included are any of the many contemporary academic economists who might argue against the film’s theories. There’s no real discussion of the large deficits of other Western nations as a percentage of their GDPs, and while the trade imbalance with China is talked about, more nuanced globalist arguments that look at the interdependency between U.S. borrowing, the American consumer, and the development of the Chinese as a trading partner are not. Clinton Treasury Secretary Robert Rubin is interviewed, and the film salutes the Clinton administration for managing revenues and spending in order to balance the budget… without mentioning the technology-fueled economic boom that led to the increased taxed revenues that allowed the budget to be balanced during this time. And because the film avoids ideology, that also means that it avoids politically charged but necessary discussions of just how our deficit got to where it is today. You won’t hear in this doc anything about “starving the beast,” the phrase describing right-wing efforts during the Reagan era to deliberately create a deficit crisis in order to force cuts in social spending.

But the film’s refusal to present more than one side of the deficit issue is not its most problematic element. I don’t have to agree with every aspect of Creadon’s deficit doom mongering to accept that, in the absence of a crystal ball, his is a valid argument. IOUSA’s main problem concerns its final message to its viewers. Let me back up. I suspect that if you ask the average man on the street if the U.S. should have a balanced budget, that person would say yes. Ask if that person’s Social Security payments should be reduced, or if his taxes should be raised, or if a favorite government program be axed and you’d get a different response. IOUSA throws around terms like “leadership” when discussing how we get out of the deficit mess, but it doesn’t include a discussion of the types of initiatives a real leader on this issue would be forced to propose. It concludes by simply imploring readers to “write their elected officials” and demand that the deficit issue be addressed. Unlike Tickell’s film, which ends with a detailed breakdown of how we can wean ourselves from foreign oil, IOUSA punts when it comes to the public policy specifics needed to resolve the problem as the film formulates it. (Indeed, in a recession, which we are probably in right now, cutting the deficit by the obvious methods — decreasing spending or raising taxes — is probably disastrous economic policy.) The only clue as to just what kind of deficit strategy is recommended by Creadon, Walker, Bonner et al comes, coyly, in the form of an end-title song:

Nick Lowe’s “Cruel to be Kind.”

Like I said, I’ve been baffled by the pass I think this film has gotten. One economist who did take on the film is Dean Baker, co-director of the Center for Economic and Policy Research and the author of the blog Beat the Press. Here is Baker, who I am taking the liberty of quoting at length, excerpted from a December 2 article on the Huffington Post entitled “I.O.U.S.A.: Failed Scare Flick of the Decade”:

Every few years there is a book or movie that stands out for its incredibly bad timing….

The basic story of IOUSA is that the United States suffers from a massive deficit problem. The film constantly comes back to the deficit using a variety of measures that are intended to scare viewers into action. After seeing the film we are all supposed to run to our phones and computers and demand that our representatives in Congress shut down Social Security and Medicare and double our taxes.

Hopefully, the film will not have this effect, because there is nothing that the economy needs more right now than very large deficits. The collapse of the housing bubble has destroyed more than $5 trillion in wealth. The fallout from this collapse has led to an even larger decline in stock market wealth. This massive loss in wealth in turn is leading to a plunge in consumption that is driving the economy into the most serious downturn since the Great Depression.

Economists from across the political spectrum agree that the only way to counteract this loss of consumption demand is through large increases in government spending. If IOUSA viewers manage to persuade their representatives in Congress to balance the budget then they will be guaranteeing the country another Great Depression.

Ironically, the heroes of IOUSA include many of the leading villains of the current economic crisis. The story prominently features Peter Peterson, whose foundation is helping to circulate the film. Mr. Peterson made a fortune running a Wall Street private equity fund, much of which he was able to shelter from normal taxation through the “fund managers’ tax break.”…

The film also interviews Robert Rubin. As Treasury secretary Robert Rubin promoted an over-valued dollar. The over-valued dollar made our goods uncompetitive internationally by raising the price of U.S. exports to foreigners and lowering the price of foreign made goods to people living in the United States. As a result, our trade deficit exploded, peaking at almost 6 percent of GDP ($800 billion) in 2006.

Rubin also pushed the one-sided financial deregulation that fueled the irresponsible lending practices of the housing bubble years. These were practices that he personally profited from as a top executive at Citigroup.

Finally, the film gives a starring role to former Federal Reserve Board Chairman Alan Greenspan. Greenspan will go down in infamy as the man who looked the other way as the housing bubble soared to ever more dangerous levels. He also claimed to be oblivious to the explosion of subprime and other high-risk loans during his tenure as Fed chair. More than any other individual, Alan Greenspan bears responsibility for the economic catastrophe facing the country. Audiences may find his lectures on the need to increase saving less than compelling at this point….

The moral of the IOUSA story – the need to reduce the budget deficit – is so radically out of sync with the economic imperatives facing the country that it is likely to quickly fall from sight, perhaps to be resurrected in film festivals showing red scare films from the fifties. This would be a positive development for the country, since it would be an enormous tragedy if this film helped to dissuade the public from supporting the sort of stimulus package needed to prevent a long and extremely painful recession.

The director of the film, Patrick Creadon, is highly talented and clearly well meaning. Obviously he just fell in with a bad crowd when he decided to make IOUSA….